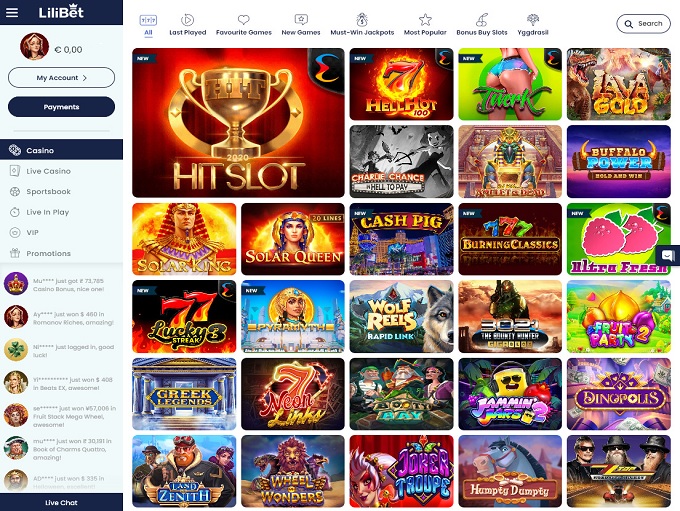 LiliBet Casino is a fancy and stylish online casino which didn’t make its grand entrance into the online casino world until this year (2019). The domain is owned by Anatolian B.V., so it is an original and singular casino domain with no sister sites. Playable in English, Finnish, German and Russian, this domain focuses on players in Northern Europe. Gameplay at this pretty and easy to navigate website is offered via mobile and instant play platforms.

LiliBet permits players to deposit using euros, Japanese yen, Canadian dollars, Indian rupees, Norwegian krone and, of course, US dollars. Payment methods accepted by the domain include (but aren’t limited to) EcoPayz, Neteller, Skrill, Bitcoin and a few others. Players should note that a withdrawal cap of €4,000 per transaction is in place at this site. If you have questions about the Lilibet service (or anything else) provided by the casino, you can reach their support team via e-mail and live chat.

The online casino is known for providing players with a Super Welcome Package when they sign up. This deal is worth up to €500 in total and spans the first three deposits that newbies make. First, second and finally third deposits are offered matches of 100%, 50% and a final 50%, up to totals of €100, €200 and a final €200, respectively, which makes up the €500 haul.

LiliBet Casino also has a 10% Live Casino Cashback offer which they frequently provide to players. The offer is only valid on wagers made on live dealer casino games and can compensate players with a 10% match worth up to €100. These offers have the same values when claimed using US or Canadian dollars, too.

The online casino carries games from very recognisable software providers. Slot titles from the likes of popular providers such as Microgaming and Net Entertainment can be played there, as too can games from Playson, IGT, BetSoft Gaming, Pragmatic Play, Play ‘n Go, Quickspin, Habanero, Evolution Gaming, Big Time Gaming and others. These titles include the likes of featured, new, popular, video slot, classic slot, virtual and table games.

Any player who wants to play nothing save for the most popular slots will do well to play at LiliBet Casino. Big-name slot titles include Rich Wilde and the Book of Dead, as well as Starburst, Gonzo’s Quest, Bonanza, Viking Runecraft, Dead or Alive II, Thunderstruck II, and Super Nudge 6,000.

Currenty there are no reviews for Lilibet Casino. Be the first one who will review it.