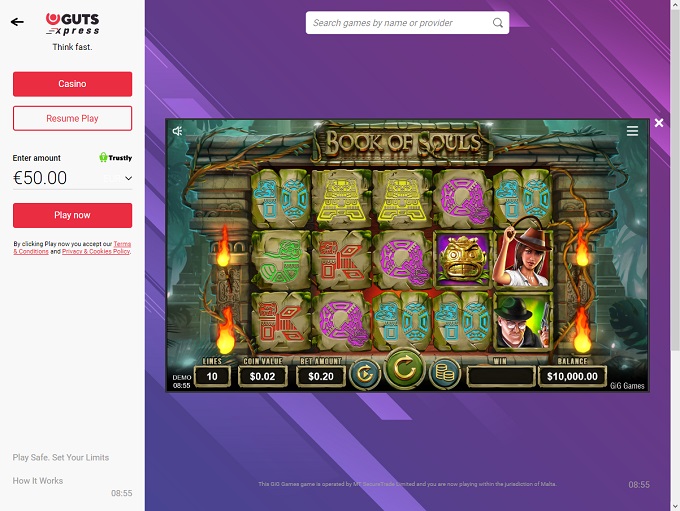 Imagine Guts Casino if it did not have promotions and bonuses. Imagine the casino if it just offered games and nothing more - no e-mails, no reminders, no offers. That is precisely what you get if you choose to play with Guts Xpress. This cut down and stripped back version of Guts is now live and is open to players across Northern Europe and Scandinavia.

At present, Guts Xpress provides gameplay in English, Finnish, German and Swedish, and holds gambling licenses issued out of Curacao and Malta. The site accepts both the euro and Swedish kronor currencies, too. Players from the United Kingdom are not currently able to play at Guts Xpress.

Amongst the deposit methods which Guts Xpress currently offers are Klara, Trustly, EcoPayz, and bank transfers. The site is primed for mobile users, so you won’t see as many deposit methods here as you would at the main Guts Casino domain. Guts Xpress does provide live chat and e-mail support, and this MT SecureTrade Limited owned site does so on a 24/7 basis.

As touched upon earlier, the online casino doesn’t offer promotions and bonuses to players. This is a stripped back version of Guts, so there are no deals of any kind to be had. In a way, though, this is ideal: it allows players to withdraw instantly, without the need to fulfil wagering requirements or other accomplish other prerequisites to cashing out. This is not confirmed, but players may also be able to use their Guts Xpress account to sign into Guts Casino. However, anything won at either site would not be withdrawable from the other, even if this were the case.

The casino’s games do largely revolve around online slots, although table games and live dealer games can be played, as mentioned above. As always the most prominent slots to star at this casino include those from NetEnt and Microgaming, so games such as Immortal Romance, Thunderstruck II, Starburst, Gonzo’s Quest, Dazzle Me and others.

Currenty there are no reviews for Gutsxpress. Be the first one who will review it.

Gutsxpress Casino supports banking methods for deposits and withdrawals for