New Customer Offer. T&C’s Apply. 18+. Get 200 free spins for 10 days after you deposit 20 EUR or more.  In standard terms and conditions there is no wagering requirement,for any additional information please contact customer service. 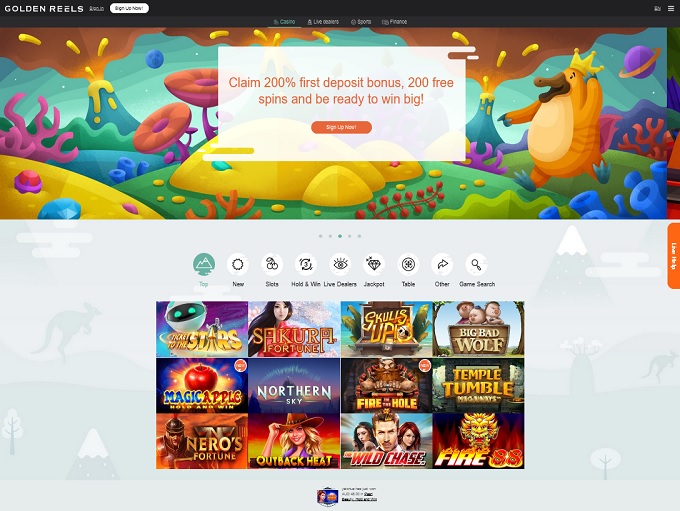 Golden Reels Casino is an English language casino gaming portal and one which also offers sports betting as well as traditional gambling games. Of course, the first thing to note about this domain is that it does not display any casino licensing information. That is a worrying sign, and it could be that Golden Reels is operating without a valid license.

The casino accepts deposits which are made using VISA, MasterCard, American Express, JCB, Discover, Poli, Neosurf, and Paysafecard. These all speak to the site being an American-friendly domain, although again without a license, we wouldn’t deposit there. Live chat assistance is supposedly available at the online casino. However, every time it was tested, the support team was “not available right now”. This is, again, another worrying sign of a dodgy casino.

Players who deposit into their accounts can claim a welcome bonus offer, but it is the only promotion of its kind to really be claimed at the site. This initial offer promises a 200% match deposit bonus on the very first deposit that a new player makes. It also dishes out 200 free spins to depositing players. It doesn’t seem to mention how much the bonus is worth.

On top of that, there doesn’t seem to be too much in the way of terms and conditions. You can access the Ts and Cs page from the lobby, but it tells players precious little about the ins and outs of the bonus offer, such as its wagering requirements for instance. Other promo deals at the site are virtually non-existent.

Golden Reels Casino claims to be able to provide casino games from the likes of Microgaming, Net Entertainment, Novomatic, Yggdrasil Gaming, Quickspin, Play ‘n Go, Playson, Booongo, Relax Gaming, Big Time Gaming, and Igrosoft. If the casino doesn’t feature a valid gambling license, though, it is unlikely to be able to deliver top titles from NetEnt and Microgaming legally. This suggests that the games they are carrying are potentially pirated copies, or even rigged to favour the house to a larger degree than they would be at other sites.

Golden Reels’ gaming library consists of top games, new games, slots, jackpot games, video poker, table games and an array of “other” titles. Just how many of them are fair and audited remains to be seen. Notable titles include Sakura Fortune, Vikings Go Berzerk, Alcatraz as well as Rich Wilde and the Book of Dead.