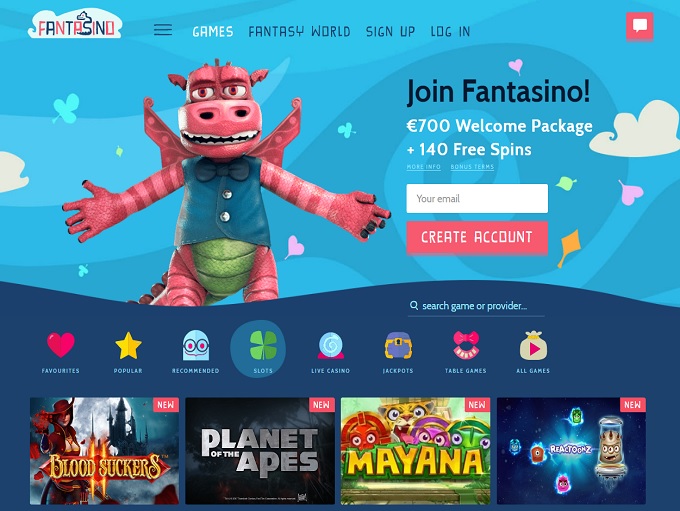 Fantasino Casino is a mobile-friendly and top quality online casino site, and one which is still relatively new to the online casino world, having launched just last year (2017). The site is operated by Every Matrix, and offers up three gambling licenses, issued out of Curacao, Malta and the United Kingdom. Players can expect to be able to enjoy gameplay in a variety of currencies and languages when playing at this casino site.

One of the biggest perks of playing at Fantasino is the option of using a wide range of banking options. The site can see players deposit using EcoPayz, EnterCash, Euteller, Giropay, MasterCard, Neteller, Paysafecard, Skrill, TrustPay, VISA and Zimpler, with support options including FAQ, live chat and e-mail at this casino site.

Players who decide to sign up and play over at Fantasino can claim a solid welcome package. The deal consists of a 200% match on the very first deposit a player makes, and it is valid up to €50, with 100 free spins on the Starburst slot in all. When players make a second deposit at the casino, they can snap up a 50% match worth up to €150. A third deposit will see players able to claim a 25% match worth up to €500, and when a fourth deposit is made, players can claim 40 free spins on the Aloha: Cluster Pays slot. All in all, this bonus is worth up to €700 in total.

Players will also note that Fantasino comes with several other goodies and perks. Players can complete missions to win rewards, level up to climb the loyalty ladder, snap up weekly promos and steal new deals and promos as they launch. All this makes Fantasino a great site for players who like their promos.

By and large, most of the games which appear at Fantasino are slots, but table games, jackpot games, and live dealer casino games can also be played at the casino site. Games are provided by a host of different developers, some of which include 1x2 Gaming, Booming Games, Endorphina, Evolution Gaming, Habanero, Leander Games, MultiSlot, Net Entertainment, NYX Interactive, OMI Gaming, Pariplay, and Play ‘n Go, Playson, Quickspin, Stake Logic and WM (World Match) amongst others.

If you’re a lover of top slots, they don’t come any bigger or better than Fantasino’s Eastern Emeralds, Bollywood Story, Legend of the White Buffalo, Jumanji, Mad Mad Monkey, Book of Dead, Immortal Romance, Starburst, Planet of the Apes, Moon Princess, Finn and the Swirly Spin and Jack and the Beanstalk slots.

Currenty there are no reviews for Fantasino. Be the first one who will review it.

Fantasino Casino supports banking methods for deposits and withdrawals for