Cleos Vip Room has a warning, we advise you play at another casino. 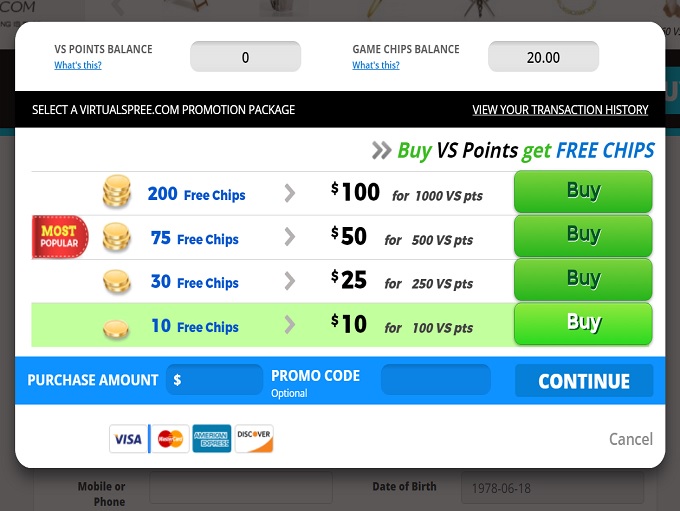 Cleos VIP Room features an Egyptian theme with the mystical Pyramids of Giza in the background; a couple of mighty hunters namely the lion and the wolf; and couple of exotic ladies who are possibly South American and Native American. Apart from that there are pictures of prizes ranging from expensive watches to handbags, from laptops to fine jewelry Cool Cat Casino and… not much else really. The front page is so empty that one wonders where the actual casino is. This site is solely accessible by citizens of the United States of America is powered by Amuzi Gaming.

By pressing the Terms and Conditions link you will be able to access the rest of the website and see how Cleos VIP Room operates. Although casino games are playable this site runs as a promotional venue where VirtualSpree points need to be purchased and are then exchanged for high end items and goods in the Virtual Spree store. Once VirtualSpree points are purchased they also come with free game chips which need to be spun on the slots or American roulette table to be eligible for cash prizes. If you prefer video poker or blackjack, they have only a 10% contribution towards their play through requirements of 30 times, for the cash prizes.

So effectively they are “selling” luxury goods for points, where the game chips come along as a bonus as they cannot be purchased by themselves. These chips would then be regarded more as entertainment as the relatively high 30x wagering requirement makes it quite hard to actually withdraw any real cash.

There are a number of complaints against Cleos VIP Room with regards to deposit problems on their site. Some players are denied the ability to deposit while others have their funds mysteriously disappear. When questioned they come up with a range of excuses such as their processor is giving problems. Some of the complaints do get resolved, but just as many are ignored or are not resolved adequately.

There are more serious concerns where players are not being paid out on time or even at all. Delays of two months or more are not unheard of as well as the cancellation of funds or accounts being closed.

If you like “play” for prizes, come and check them out. If you want to gamble it’s best to look elsewhere.

There’s not much choice at Cleos VIP Room, apart from the aforementioned blackjack and roulette, there are some nice video slots that are colorful and have delightful graphics.

So far so good , i'm supposed to get paid on my paytoo account this upcoming tues, we will see.