20%
Cashback is available on Monday from 00:00 am UTC time, and you can pick it up within 48 hours, which is until Wednesday. The minimum cashback amount is 1 EUR. For informations about wagering contact customer support.
non cashable
CLAIM 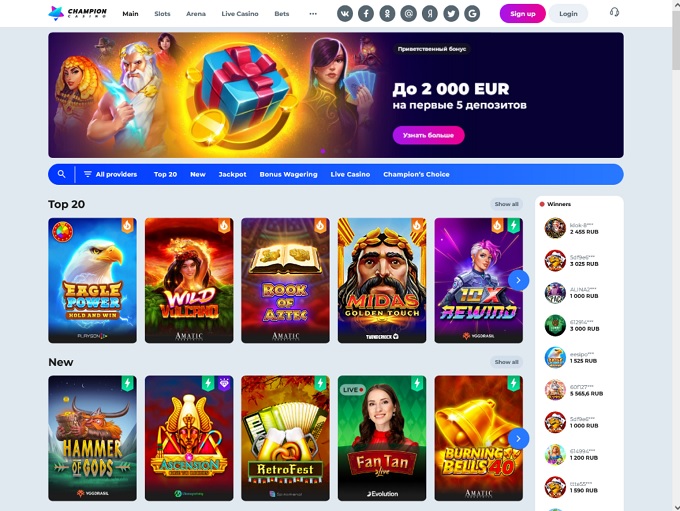 Champion Casino is one of the smaller domains you will find out there in the online casino world. This is an English and Russian language casino site, and it has been known to struggle to attract a significant crowd. However, the online casino is advertised as carrying a Curacao issued gambling license and has been around since 2016.

The casino site is notable for offering live support around the clock, although e-mail support is also available at this domain. Only VISA and MasterCard deposits are accepted at the site, and that limited array of payment methods does mean that there are going to many players who don’t want to play there. This is an area where Champion Casino could improve.

Curiously enough, the online casino doesn’t seem to offer any promotions or bonuses to players. This is most certainly strange because they used to offer a 100% match worth up to £200 and 100 free spins to any new player who chose to sign up and play there. There is every possibility that the welcome bonus offer will return in time, but at the time of writing, no such offer is available.

Champion Casino does not feature a wide range of games, either. When all of this is weighed together, it is not surprising that there aren’t too many players eager to sign up and join its ranks. The site used to offer games from several providers, but lately, these have been cut down to just a few. World Match (WM), and in-house titles from Russian developer, Champion Game seem to be the only playable games at the site at this moment in time.

Players should also note that a few roulette, blackjack, Russian poker, and classic slot games can be found alongside video slots at the online casino site. The limited range of games certainly won’t appeal to many players, but for those players who are eager to give the site a go, a few titles do stand out. Those casino games include the likes of Book of Winner, Lucky Lady Glamour, Hearts, Sevens on Fire, Rich Fruits, Gulliver, Fire Frenzy, Robinson, Bananas, Riddle of the Sphinx, Hot Sevens, Computer World, Casinos and Stars and Savanna Queen. All of the games which do feature at Champion Casino can be played for free as well as for real money. This might help if you’re unsure about whether to play there or not.

I have to say that Champion Casino is a very good online casino, because they actually do what they state in their ads, I just found them and am already very pleased, I will be recommending them to everyone I know.