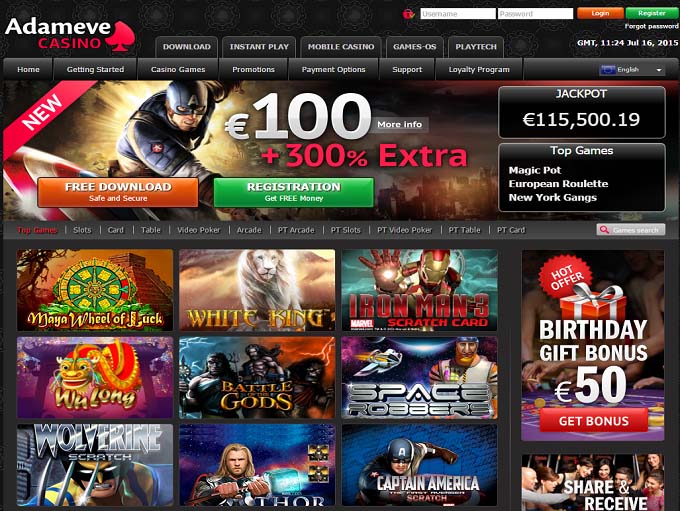 The symbol of this casino is a red spade, which you’ll see at the top of their home page. Apparently, it’s meant to resemble the apple from the story of Adam and Eve. Also in keeping with that story, the spade looks like it has had a bite taken out of it.

Although residents of many countries and regions around the world can join Adameve, this casino is apparently geared towards the people of Russia and some of the surrounding regions. The only two languages supported by the site are English and Russian. Adameve only accepts three currencies-euros, British pounds and US dollars.

The casino does provide more options when you are looking to fund your account. They accept credit and debit cards as well as such other popular choices as Skrill, Neteller, ClickandBuy and EcoCard. Adameve charges no fee for any of their banking options and all of the money you deposit will go into your account instantly or within one minute. The casino also uses highly advanced 256-bit SSL encryption, which ensures the safety of all financial transactions.

Even before you make a deposit, Adameve will give you a No Deposit bonus which is worth at least 50.00. The casino gives you another cash bonus when you make your first deposit. That cash is in addition to their matching bonus which, if you take advantage of their special High Roller offer, will multiply the size of your deposit by as much as four times.

This site has recently expanded their selection of games with the addition of Playtech Software. Adameve now has hundreds of games with outstanding 3D graphics and digital sound. All of the Playtech games are very entertaining to play, including such distinctive offerings as the video poker games, “25-Line” and “50-Line Coliseum Poker “

Adameve has more than two dozen video poker games you can play, as well as dozens of themed-scratch cards, which include a full selection of Marvel Comics games. You can play “The Avengers Scratch,” “Fantastic Four Scratch” and “Spider Man Scratch,” among others. All of those characters are also offered as characters in Adameve’s slot games.

If you’re looking for something other than slots, video poker or scratch cards, Adameve Casino also has a full selection of card and table games as well as a number of enjoyable and unique arcade games.

Currenty there are no reviews for Adameve Casino. Be the first one who will review it.