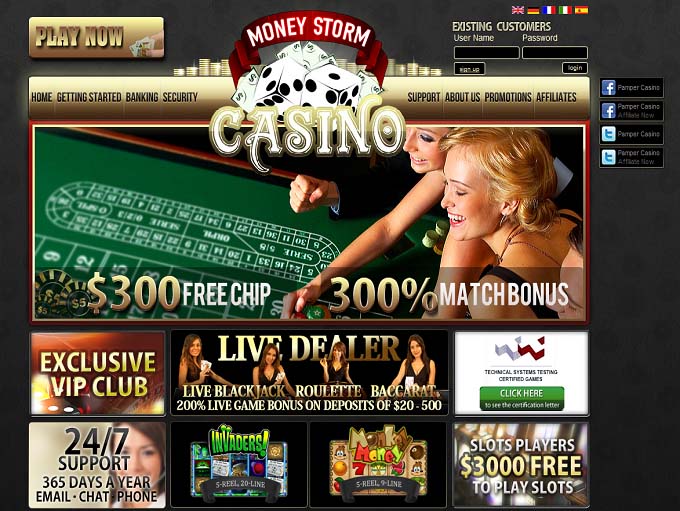 Moneystorm is a Costa Rican run casino that has caused an utter maelstrom for itself and not for any good reasons. For starters the Operia Costa Rica Sociedad De Responsabilidad Limitada acts as the operator yet no mention is made of where the actual jurisdiction of the gambling licence is held. Without a licence players have no real recourse when it comes to disputes with the casino over non-payment of winnings. Chalk a big one against them.

Next is the fact that their terms are terribly disadvantages to players, namely most of the bonuses on offer are considered "sticky bonuses" which cannot be withdrawn from the casino and are lost immediately whenever a withdrawal request is processed. Even if you somehow mange to work out what the confusing wagering requirements are, from the website, the bonuses are still automatically deleted once the wagering requirements are completed.

Furthermore there are numerous complaints from players regarding unresponsive customer service where questions sent can take day to even months before being answered. Correspondence is sometimes sent in unsupported formats so the messages won’t even open. Don’t be surprised if a pay-out takes almost a year to be fulfilled. Also their deposit methods work like a charm most of the withdrawal methods are flawed and even the support staff emphatically admit that Skrill doesn't work. Players have also been hit by unreasonable and unexplainable withdrawal fees.

The biggest issue we have is that another member of Moneystorm’s casino group was implicated in running unauthorised versions of Microgaming and Playtech games on their portal effectively pirating the software and not compensating the developers. Both cases have been confirmed by the respective software provider. Such unethical business practices cannot be tolerated and has led to black listings on numerous casino review sites.

As such it is not hard to see why Moneystorm Casino ought to be avoided.

Of the legitimate games there is definite something to suite all needs. Take a pick of American, European, Super 7 or Single deck Blackjack.

Currenty there are no reviews for Moneystorm Casino. Be the first one who will review it.