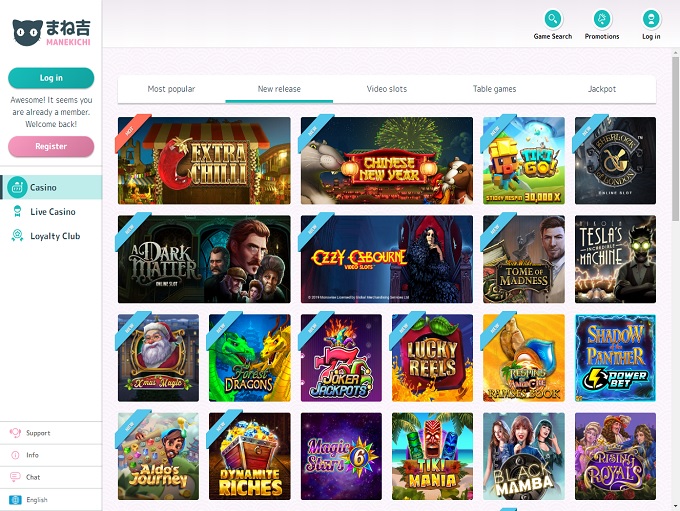 Manekichi Casino (as its name suggests) is primarily geared towards players based in Japan. This PlayCherry owned casino is rather restrictive about who it attempts, based on where they reside. Both English and Japanese gameplay is available at this domain, which is notable for its mobile-friendliness and its considerable array of top games from leading providers. Manekichi Casino launched in 2019 and is Maltese licensed.

Manekichi is about as close to a legal and legitimate Japanese online gaming site as you’re going to find. The casino is named after the traditional cat (good luck) figurine popular in the West. Most of the payment methods are geared towards Japanese players. This means that you can expect to find Venus Point, iWallet, EcoPayz and VISA (both debit and credit) options to top-up a balance with. Support is available via live chat, and while Japanese support is the main offering, it is possible to receive assistance in English, too.

This online casino is not believed to offer players a welcome bonus offer. However, there are other, smaller-scale bonuses and promotions which can be claimed when playing at the site. Most of these are delivered via a loyalty program, which is open from the moment you sign up at Manekichi Casino.

There is a tasty VIP club available for all players at Manekichi. This is based over five tiers, spanning Bronze, Silver, Gold, Red and Rainbow levels. Perks of the online casino’s VIP program include achievements, surprise bonuses, cashback offers, annual birthday bonuses, and the ability to claim offers with smaller wagering requirements. Other perks are unlocked the higher up the loyalty ladder a player climbs.

Over 20 software developers have come together to provide players with games at Manekichi Casino. This sees the site able to offer a vast library of over a thousand individual online casino games. Just a few of the software providers associated with this site are Play ‘n Go, Net Entertainment, Quickspin, Yggdrasil Gaming, and seemingly every other major Scandinavian provider on the market. This shouldn’t come as a surprise since Manekichi’s operator, and owner (PlayCherry) is an experienced, Sweden-based veteran of the industry.

Amongst the major slots you can expect to play at Manekichi Casino are Starburst, Rich Wilde and the Book of Dead, Extra Chilli, Big Bad Wolf, Moon Princess, Gonzo’s Quest, and more. Table games and live casino titles can also be played at this casino if you’re not feeling in the mood for slots.

Currenty there are no reviews for Manekichi. Be the first one who will review it.

Manekichi Casino supports banking methods for deposits and withdrawals for