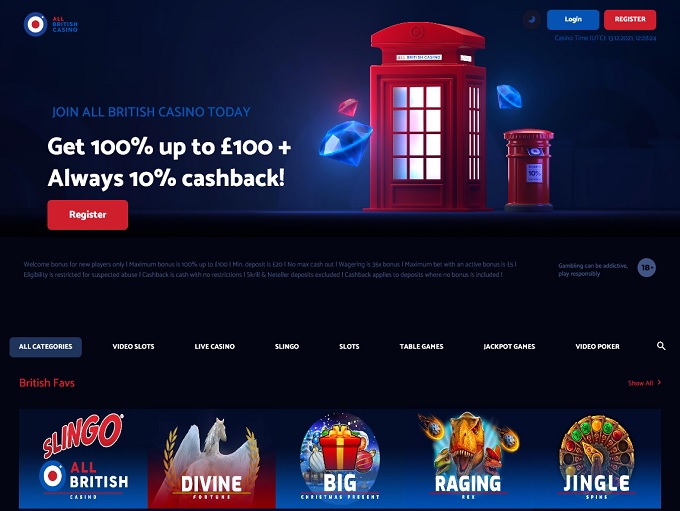 When you access this site’s home page, you’ll discover that they certainly take their name seriously. You’ll see some very British sites, including Big Ben and the face of an actual British Bulldog. The insignia of this site is a bullseye, reminiscent of the signs you’d find on British streets or in rail stations.

All British accepts members from most countries of the world, with the notable exceptions of France, Italy and the United States. But with this casino’s name, you won’t be surprised to learn that they are most interested in attracting the people of the UK. The casino accepts only British pounds and the only language supported is English. “The sole focus of All British Casino,” they say on their website, “is to provide the UK public with the best possible playing experience.”

All British has a Welcome bonus that, by the standards of most online casinos, is not very big. They will give you a 100% bonus on your first deposit, though the bonus is limited to just £50.

Once you become a member of the site, you can take part in their other promotions, which include special reload offers. The casino will give you as many 50 free spins every week that you make a deposit. All British will frequently change the game that offers the free spins, though it will always be one of their most popular slots.

All British also prides itself on both the integrity of their games and the safety of your money and personal data. “All British has invested heavily to provide players with a completely safe and secure environment,” the casino says. “All British takes pride in providing the highest level of security for their player’s transactions and personal information.”

Games at All British Casino

There are over 100 games at this site, including video poker, keno, lottery and video poker. The games at All British are provided by NetEnt Software and they include many of their very popular slots. Among these games are such international favourites as Starburst, Piñata Grande, Gonzo’s Quest and Steam Tower.

All British also has a Live Dealer casino that offers Blackjack, Roulette and Punto Banco. Most of the live games are brought to your direct from a television studio in Malta. The casino also broadcasts seven hours a night live from the Oracle and Portamaso Casino in Malta.

Currenty there are no reviews for All British Casino. Be the first one who will review it.