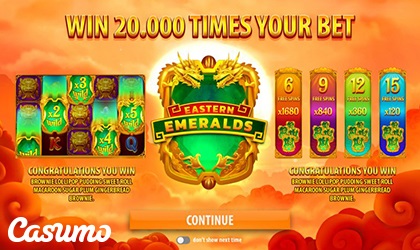 For the first ten days of July the new Quickspin slot Eastern Emeralds will only be available at Casumo casino. On the tenth of July, the game will be fully released in all partnered casinos. Now, if a casino as big as Casumo and a producer as famous as Quickspin decide to launch a promo like this you can be sure that the game is worth playing.

We haven’t been able to get a spin in yet, but we have found the specs for the game and they do look good. Of course, the game works perfectly in mobile and desktops alike and seems like it has received pretty substantial attention to looks and sounds just as well. There seems to be plenty of animations in the game, so you won't be stuck just staring at the rolling reels.

The real reason why we are excited about this game are the prizes. Eastern Emeralds combines big wins with massive multipliers, which results in a possibility to land some truly gigantic prize combinations. There are also free spins in the game, and it's up to you to decide how many you want. Of course, the more you claim the smaller the multipliers for the wins. With a bit of luck and a few free spins, you can win up to 2667 times your bet. With most slot topping out at 500 or 1000 times your bet you can be sure that this game does pay out royally when it does!

Soar Above The Sky With New One from Nolimit City

EOSreel to Rock the Gaming Industry