Soar Above The Sky With New One from Nolimit City 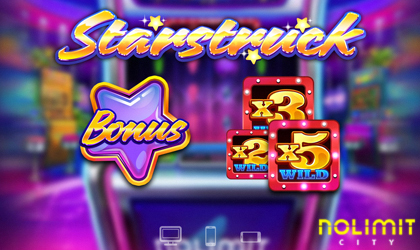 A Swedish-based developer may not release new titles as frequently as the others do, but once it does, it almost instantly becomes a huge hit. They are called Nolimit City and they are surely one of the most promising companies from this country.

What Did They Prepare For Us?

Last month, they launched Owls, which was very nice and relaxing, but with the latest one called, Starstruck, we can expect more action and, generally speaking, a fast-paced tempo.

They designed another 3x3 slot machine that abounds with colorful symbol, magnificent deign and possibly the most important thing – straightforward gameplay.

This game is equipped with five pay lines, as well as 3x3 reels and anyone with a bit of luck could potentially be rewarded with up to 1000x during the Starstruck-bonus mode.

In order to collect this super-cool prize, gamers must lock the star that is placed in the middle reel and take their pick of high valued multiplier stars.

Avid players are probably going to be thrilled with this reel slot due to the fact that it doesn’t look like any other ordinary one, especially when it comes to its 3x3 theme.

Furthermore, it offers a lot of frequent base game wins that will easily engage anyone who is a true fan of this form of entertainment. It’s worth mentioning that it doesn’t matter whether you own a mobile phone or computer, it can be played on every device!

Per Lindheimer, Product Owner for the brand, commented on the game:

“Designing a classic 3×3 slot with a high hit frequency and not just pushing only low wins isn’t an easy thing – but this machine with its stacked multiplying Wilds and the Any Bar-pays, is a thrilling experience – both in main game as in the Starstruck feature! Starstruck has been a joy to work on, to bring something new to a classic game play.”

Last month, they made an agreement with reputable casino, Casumo. Both companies have come to a realization that both of them will benefit from this partnership, hence, this was a logical step for these two.

Ultimately, all games from a popular developer will immediately go live, including some of their most popular reel slots, such as Hot Nudge, Fruits, Ice Ice Yeti and many others.

Malcolm Mizzi, Commercial Director for Nolimit, commented on this collaboration in an official statement from the company:

“Seeing our games live on Casumo’s casino library means the world to us! Everyone knows the level of excellence the company has strived to achieve in all these years, so having partnered up with an operator like Casumo makes us a step closer to realising our dream to becoming one of the leading supplier brands out there.”

“We have been impressed by the quality of the Nolimit portfolio for quite a while now and we believe that the titles will be appreciated by our players, especially within our core markets. We are also excited to see the performance of upcoming games from Nolimit. In addition, Casumo are looking forward to a fruitful long-term business relationship with Nolimit. Let’s go.”