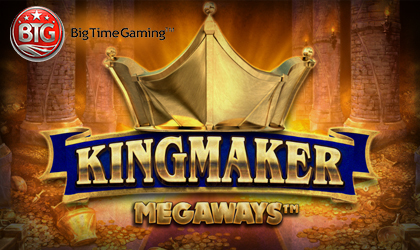 Big Time Gaming has announced the release of a brand-new slot that utilizes the popular Megaways feature. The company…

…behind this title has launched the game as an exclusive Casumo release. Other operators will have to wait until August 28th until the game gets released on a wider scale.

Ever since this game was announced earlier this year, critics from all over have been raving about the impressive graphics the game sports. The few available screenshots gave an impression of a rather immersive title that boasts obvious attention to detail.

The theme takes players to a medieval setting where castles and mountains are riddled along the horizon. The team behind this slot has gone above and beyond in order to make this…

…a pleasant visual experience. This approach can be seen in everything ranging from the background over the frame design and right down to the symbols themselves.

Speaking of which, the game doesn’t offer many surprises in this department. Kingmaker might be a Megaways game, but it is still a Big Time Gaming title. In other words…

… the symbols feature the same card royals this studio uses for most of their other games. Higher paying symbols are custom made for this slot and are represented by various jewels.

With all that said, the true star of the show here is the Megaways engine that runs the 5 reels. Players will enjoy anywhere from 3 to 7 rows which adds up to 16,807 ways to win. The other aspects of the game include a 0.20 to 20 bet range with a potential maximum win set at 40000x the original bet. This is a high volatility title with an estimated RTP of 96,65%.

As far as special features go, BTG offers Gem Multipliers and Extra Spin modes. The entire Gem Multiplier mechanic adds a lot to the base game and puts this slot in a whole different category.

Nik Robinson, CEO of Big Time, commented on the newly released offering: “Kingmaker takes players to a medieval kingdom where they are given the chance to take the throne and the riches that come with it. The game uses our revolutionary Megaways mechanic. This combined with the unlimited multipliers in the base game, sets the game on a perfect trajectory to deliver incredible wins.”

Andreas Vickman, the Business Producer at Casumo, also added a comment regarding this release: “Casumo.com is delighted to be working together with Big Time Gaming and to give our players an exclusive first look at their next royal release Kingmaker. Kingmaker is a great addition to Big Time Gaming’s Megaways category, featuring an unexpected twist which I’m sure our players will love.”

The new title is currently available exclusively at Casumo’s online platform while the industry-wide release date is set on August 28.

Big Time is a software provider based in Australia, that is known for delivering high-quality titles to customers and clients in various regulated markets. The company is run by a team of industry veterans who have the necessary experience to anticipate how the market moves.

It is currently certified to operate in Alderney, Gibraltar, and Canada.