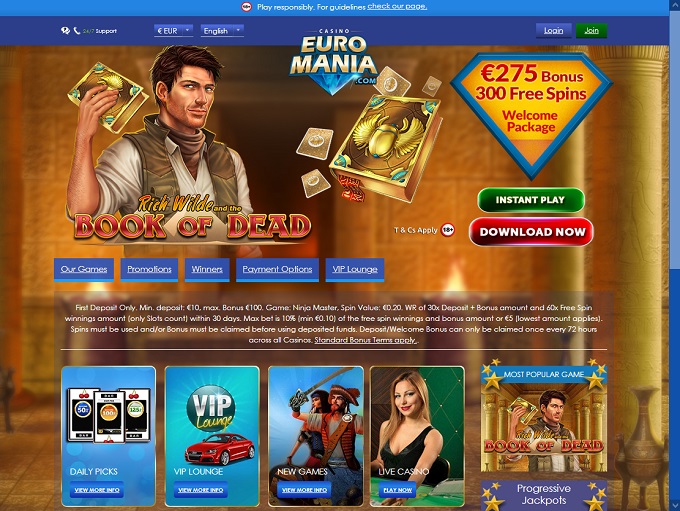 EuroMania Casino is one of the few online casinos to be wholly powered by SkillOnNet. This casino launched in 2008, and remains one of the smaller casino domains. That being said, there are more than enough gaming options to suffice most worldwide players at this site. Players can also choose to play over their mobile phones and tablets at this Curacao licensed casino if they wish.

After signing up as a new player over at EuroMania Casino, players can claim five match deposit bonuses on their first five deposits. Your first deposit is worth a 100% match up to £100 and 50 free spins, whilst your second and third deposits are worth 50% matches up to £75 a piece, with 75 and 50 free spins issued, respectively. Your fourth and fifth deposits are worth matches of 50% up to £100, with 75 and 75 free spins offered, respectively. Players must enter the bonus code of MANIA to claim these offers. After doing so, they can claim Daily Picks, VIP Lounge, and free spins deals at this casino.

Skill On Net may provide the power for EuroMania Casino, but they certainly aren’t the only software providers at the site. NextGen Gaming have also unveiled a number of games over at this casino, as have leading software provider, Microgaming. The range of games you can expect to find at this site covers popular games, roulette games, slots, table and card games, video poker, live casino games, and a selection of “other games”.

If you a touch of the traditional with your casino gaming, why not try your hand at American blackjack, European blackjack, or progressive blackjack? You can also expect to play Caribbean poker, casino hold’em, casino war, baccarat, let them ride, pai gow poker, craps, punto banco, and more at this casino.

Currenty there are no reviews for EuroMania. Be the first one who will review it.

EuroMania Casino supports banking methods for deposits and withdrawals for