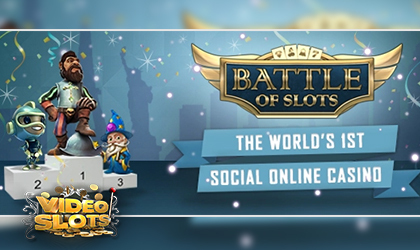 Mobile slot play has become increasingly popular and accessible, and that’s one of the reasons, why leading online casino Videoslots.com has just announced that its Battle of Slots title is now available on the go.

An Innovation In The Industry:

Namely, their latest retention tool is now accessible on mobile devices, enabling users to play its Battle of Slots title via iOS and Android.

Approximately four years ago, Battle of Slots (an industry-first gamification concept) was unveiled and it has completely changed the industry, especially online casino with its unparalleled multiplayer gaming experience.

It comes with huge prize pools and gives consumers the opportunity to go head-to-head and also to virtually mingle with others. How is that possible?

Well, it’ because there you will encounter a poker-style lobby where other players from different parts of the world are playing too!

Battle of Slots allows users to try out a huge selection of games from various providers, such as Thunderkick, Play’n Go and NetEnt, stimulating player involvement as well as lifetime value.

“Battle of Slots has proved to be one of our most successful innovations to date earning a wealth of awards in the process. It was therefore a no brainer to develop a mobile version to ensure more people than ever can experience the excitement that the concept brings. We know players will enjoy playing on the go.”

The online casino represents a group of creative and talented casino enthusiasts who have come to a decision to build their own online casino.

They knew that this wasn’t going to be easy due to the fact that only the best providers are the most reliable ones and finding them wasn’t an easy task.

Cooperating with just anyone wasn’t good enough. They needed the ones they can rely on, so they enlisted the biggest ones in the gaming industry.

Furthermore, the first game that was released came through NetEnt and the rest “was history.” Powerhouse names like Big Time Gaming, Thunderkick, Betsoft, Microgaming, Yggdrasil and many others were the latest in a slew.

For eight years they have achieved a lot and became one of the most reputable websites from the industry. They are continuously working upgrading themselves in every possible way!

Want A Christmas Gift? Play Naughty Or Nice III To Receive It!

Late for the World Cup but Still Here for Football 3x3

A refreshing slot from 1x2Gaming that keeps on surprising

Swipe & Roll's Retro Features Will Transport you back to the 1970's

Check out the new Swipe & Roll slot from NetEnt