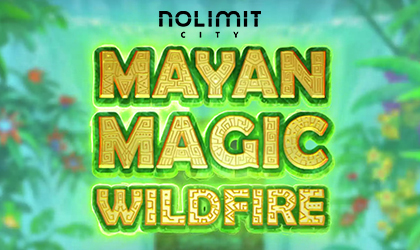 If we could single out one developer just to point out how hard-working it is, Nolimit City would definitely be our choice. In the last couple of months, we’ve witnessed how devoted and industrious they are as far as new games are concerned.

We mention them once again because they have just unleashed another spectacular slot that is going to blow us away just like its predecessors. It’s titled Mayan Magic Wildfire and it is a true delight!

Get Ready To Be Entertained!

Just last month, the supplier amazed us with an eerie, yet interesting game, called – Tombstone. However, unlike its precursor, this one is far more cheerful and vibrant. This reel slot is currently accessible across their huge network of leading operators, following a two-week timed-exclusive release on a leading casino operator.

The first thing that players will notice as soon as they launch this slot is high-quality graphics that will leave no one indifferent. Besides that, equally important spectacular gameplay will keep gamers wide awake.

Those who prefer mobile over desktop play will surely enjoy this game on their favorite device. They will be taken to an intriguing and mysterious rain forest that can be found in the depths of the Amazon jungle.

Nolimit City has always been famous for their one-of-a-kind games with unique stories and this one is no different than the previous ones. It is equally as enticing and thrilling and comes with interesting gameplay that is going to keep users continuously occupied.

The developer created a fun slot that comes with 5x3 reels and consists of ten fixed lines which pay both ways, as well as fixed action on reels 2-3-4. One of the crucial things players must keep in mind is the fact that they have to try collecting as many wild characters as possible.

It’s worth mentioning that each locked-in wild on screen allows them to trigger an additional respin, as well as upgrade their win multiplier which will actually increase the return. As you have probably assumed, the new game is ready to bestow gamers with some amazing wins, thanks to the landing wilds.

Besides all these phenomenal things, players can look forward to a ‘Mystery Wild’ and ‘Mystery Sync’ random features that land during gameplay. Per Lindheimer, Product Owner at Nolimit, commented:

“We’ve worked hard to create a game with a simple feature, something we can award to be triggered often, but that also can keep the action going for a long, long time with amazing wins. Mayan Magic Wildfire has a lush and beautiful slot theme that fits its mid volatility perfectly – this game is fun if you play 15 rounds or 1500 rounds.”