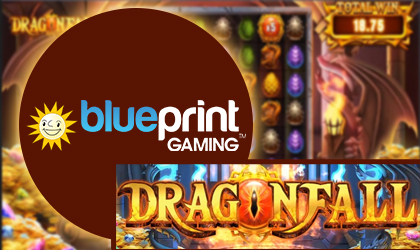 UKGC and Alderney licensed content developer, Blueprint Gaming, enhanced its collection of games with a super-hot Dragonfall video slot. The 8x8 configuration brings a selection of actionable features which are “the main guilty ones” for the dynamic gameplay.

During the recent period, the studio was busy enhancing the collection of games with either new titles or boosting the older ones with innovative mechanics and inventive features. The teams also joined forces with multiple partners to strengthen the position and continue expansion.

Commenting on the newest addition to the catalog, Jo Purvis, Director of Marketing and Relationships at Blueprint Gaming, declared as follows: “This enchanting title brings a new dimension to our portfolio, with tumbling reels dropping red-hot prizes for players. Dragonfall’s strong aesthetic appeal and innovative features are sure to tempt brave players into the dragon’s magical layer.”

A New Dimension to the Portfolio:

The high-variance game inspired by dragons hosts no less than four mystical modifiers that are in charge of raising the temperature even more. Those are Mystery Flame, Mega Drop, Fire Burst and Dragon Rage. Let’s not forget to mention Dragon’s Eye…

… that serves as a replacement for any symbol and unveils the value of winning multiplier. Moreover, in case more than one wild appears in the same winning combination, it multiplies the values together boosting the winning opportunities additionally.

Three or more Dragon’s Eye will activate the bonus spins round. Those remain fixed in place during the session to making room for extra chances for a win multiplier to land. Overall, the game reveals massive opportunities to grab rewards, thanks to the tumbling reels and cluster pays.

The gang in question here is none other than The Goonies, a hit release by the studio. The game was more than well-accepted among the fans, but the studio wanted to spice it up a bit with one significant modification. They implemented a Jackpot King progressive system …

…which takes rewarding potential to another level. Besides the Royal and regal pots, punters have the chance to collect some of the amazing prizes that come with this new feature. The system itself has paid out an amazing $82.9 million.

BG seeks inspiration in numerous topics, but the common thing for all of them is the high level of action accompanied by innovative mechanics. One of the most representative examples of such a mighty combo is seen in…

…Gods of Olympus Megaways, which comes with no less than 15,625 winning ways and a special feature (as assumed from the name). Introducing punters to Athena, Poseidon, Ares and of course, Zeus, the studio managed to breathe new life into a widely exploited topic.