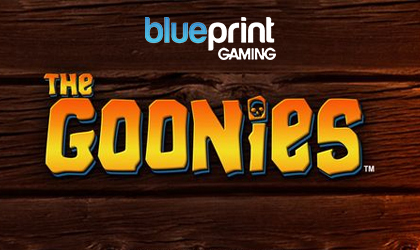 Blueprint Gaming has decided to release a new and improved version of one of their best performing slot games – Goonies. The new version of the game comes with…

…all of the familiar features that have made it popular in the first place. The main difference is the addition of the Jackpot King progressive system.

The developer’s decision to revamp the title has come across a lot of interest from loyal fans. Even though the game was a complete hit in its original form, the company has decided to spice things up by adding this title to the ever-growing list of Jackpot King slot games.

Those who are not familiar with this progressive jackpot system can expect to get a chance of winning a number of attractive prizes. The system provides the main Jackpot King Pot in addition to two smaller pots – the Royal and Regal pots. These have to be won before reaching $4,500 for the Royal and $45,000 for the Regal pot.

As far as the impact the implementation of this system has had on the original slot, it is quite minimal. Players will still be able to access all of the original features such as the Mikey’s Hidden Treasure and Super Sloth’s Bonus Spins among others. Overall, the Jackpot system implementation was done rather flawlessly, thus allowing the company to retain the very core of what the story is all about.

Jo Purvis, Director of Marketing and Relationships at Blueprint Gaming, offered a comment regarding the update: “The Goonies has been an overwhelming success for operators, with players embracing the opportunity to hunt for the elusive treasure of One-Eyed Willy. “With our Jackpot King functionality now available during the gameplay, players will be performing the Truffle Shuffle should they strike lucky and claim the big prize!”

Blueprint will make the updated version of the title available across their network of affiliated online casino operator shortly.

Blueprint is one of the leading software providers in the industry. This UK-based company is specialized in creating and publishing high-quality slot games that are meeting and exceeding the standards of the market.

Established in 2001, the brand has quickly become one of the premier providers in the UK. Their attention to detail and an immense appetite for creativity has put them on the Gauselmann Group’s radar.

This massive German entertainment group has been present in the regulated gambling markets long before online slots were even a thing. With such a strong and capable partner at their side, Blueprint has only bolstered their plans of becoming the leading software provider in the industry.