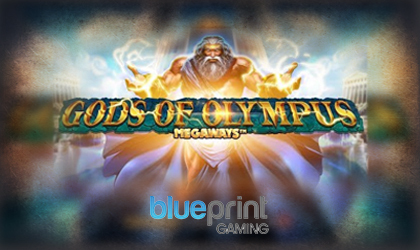 Blueprint Gaming has added another game to their growing portfolio. Titled Gods of Olympus Megaways, the new release…

…is an action-packed adventure that uses the always exciting Megaways mechanic.

…as well as a solid base game experience. Being a Blueprint title, this slot also has a lot to offer in terms of graphics.

The theme is all about ancient Greek deities. Players will have the chance to see Athena, Poseidon, Ares and of course, Zeus – the king of gods and the god thunder.

Not only is he the master of all other gods in the game, but Zeus also has the power to award players with a mystery modifier on any spin in the game. On top of that, he also fires thunderbolts that give players the choice of several artifacts, each one revealing a unique bonus spin mode. There are the Colossal, Wild Storm, Mighty Wild and Rise of Olympus Bonus Spins.

These intriguing special features are combined with the base game that runs on the well-known Megaways mechanic. With 15,625 ways to win, Megaways has become one of the most popular game modes in the industry.

Jo Purvis, Director of Marketing and Relationships at Blueprint, offered a comment regarding the new release: “Gods of Olympus is an exciting addition to our slots portfolio, with plenty of bonus rounds to keep players gripped and entertained. The superpowers that these famous Greek gods hold ensures that the gameplay can change in an instant, keeping players on the edge of their seats. We’re confident the game will make a thunderous impact in the coming months.”

Gods of Olympus Megaways will be available at the supplier's affiliated online casinos following the release of the game.

Big Time Gaming is the company that developed the innovative Megaways pay mechanic. At its core lies a random reel modifier that has the power to change how many symbols show up on a reel at any given time.

As a result, players can get a large number of symbols per spin, which means that the number of paylines changes as well.

This game mechanic offers up to 15,625 ways to win, giving it plenty of potential for higher wins. BTG has licensed out the mechanism and now a number of top tier providers are developing games that use this innovative mechanic.

The UK-based software provider that specializes in designing exciting titles for the global market. Their games have found their way into some of the most popular online as well as land-based casinos around the world.

Its team is a part of Gauselmann Group – a German, family-owned corporation that has been providing entertainment and gaming solutions since 1957.