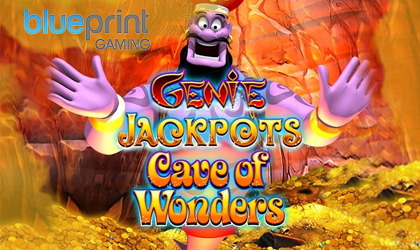 Blueprint Gaming has been working hard to bring a new installment to their Pub Fruit Series to the market. The latest game in the series has just been released under the name of Genie Jackpots: Cave of Wonders.

This time around, the studio has introduced a number of…

…new features that spice up the core gameplay and more. It is a proper Pub Fruit Series game but packed with plenty of cool features.

The latest addition to the Pub Fruits family brings a simple yet elegant vibe, just like the previous games. Players are taken into the interior of a cave where they will find the mainframe. The background features an interesting mixture of warm and…

…cold tones that create a very specific atmosphere. Like in most slots of this type, the main graphical details are focused on the reels.

Speaking of reels, they come in the form of a 5x3 grid that sits low on the screen. Much like other titles from this series, the bottom of the screen is reserved for the reels while the upper portion belongs to the extra features.

Blueprint Gaming has added a total of 16 additional features as well as a chance to activate the Super Board. Just like previous games, the extra features are the main attraction. If you are wondering where the Genie is, worry not. Players have the chance of entering the Cave of Wonders. Doing this requires them to collect at least three lamps.

Once in the Cave of Wonders, players will meet the Genie who can potentially drop massive payouts!

The studio behind titles such as Return of the Kong Megaways and Deal or No Deal: Double Action is hoping to achieve a similar level of success with this title like they had with the previous games.

Jo Purvis, Director of Marketing and Relationships at Blueprint, offered his comment regarding the new title: “We’re delighted to see the return of the Genie, who will make dreams come true for players as they sail away on a magic carpet ride to enchanting prizes. The original game was a massive hit and transforming the gameplay into the classic pub fruit machine format is sure to resonate with a wide range of players.”

The reel game is available at all Blueprint-affiliated online casinos.

Blueprint is one of the largest software providers for the iGaming industry located in the UK. The company started out as an independent studio that showed a lot of potential for growth. Active for over 10 years, it is considered a veteran of the industry. Their games oftentimes featuring cutting-edge technologies and solutions that aren’t often seen in the industry.

Such practices have put them on the radar of Gauselmann Group – one of the largest iGaming organizations in the world located in Germany. Today, the brands is working hard at delivering top-tier titles to a large portfolio of clients and partners.