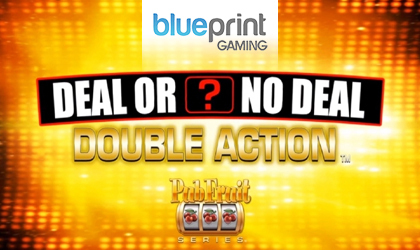 Blueprint Gaming has numerous titles in its offer which have grown large followings. However, their Deal or No Deal series is something special. The latest addition to this saga, titled Double the Action, is promising to reach the same level of success as its predecessors.

The new game brings all the features that brought the original title its fame, and more. Based on a game show that took over the world, players can expect all kinds of awesome options and base game mechanics.

An Abundance of In-Game Features:

One of the defining components to the Deal or No Deal slot game are the extra features. Needless to say, this is no ordinary slot. The studio behind this title did their best to merge the best features of the game show with a solid core game mechanic. There is so much to do in this slot that the theme itself is borderline non-existent!

The original title that first brought this type of gameplay was received very well thanks to the unusual layout it brought to the table. The demand at various online casinos was all the proof Blueprint needed to start working on a sequel of some sort.

This latest installment of the game features two special games a player can play at the same time. There is also the so-called Red Alert mode where the reels turn red and the player can spin to win several times in a row.

As far as other special features, there are 16 different games to be played. Fans of the game show will likely recognize the Super Board, Big Money rounds and more unique elements often seen in the game show.

Jo Purvis, Director of Marketing and Relationships for the supplier, offered her comment on the newly released title: “Our Pub Fruit Series has caught the attention of our operating partners and more importantly, the imagination of the players who love the retro-experience we’ve bought to online gaming. With additional features and even more ways to beat the banker, Deal or No Deal: Double Action™ is set to provide even more tension when opening those boxes!”

The game will be available across all Blueprint Gaming partnered casinos and platforms.

Active for over a decade, Blueprint is one of the UK’s prime providers of iGaming content. This company is known for focusing mostly on the domestic markets, although they have been offering various products outside the bounds of the UK online space.

As a company, they are a part of Gauselmann Group – a family-owned, international entertainment and gaming company from Germany. Being a part of such a massive and well-established family has given Blueprint a much-appreciated push and a competitive edge on the market.

Today, they are one of the most competitive providers when it comes to somewhat different slot games and software solutions. With a few more titles in the pipeline, chances are they will remain at such a high level in the industry.