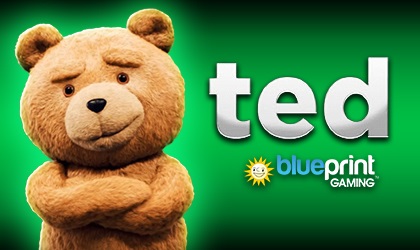 Fans of crazy comedies with waggish and frisky characters surely remember a true legend among teddy bears, named Ted. He made us laugh and lifted our mood with his amazing, albeit somewhat vulgar, jokes.

Since he is unforgettable and it’s been years since the movie was released, Blueprint Gaming put a smile on our faces by bringing this adorable bear to its fast-expanding Pub Fruit Series!

Is He As Mischievous As In The Movie?

Well, we must admit he isn’t, yet, he managed to keep his goofy and witty side! Since this game was inspired by the film, fortunately, he is the main character in this game.

The game is designed as a famous fruit machine and your duty is to follow this little fella as he tries to grab some prizes for you! What a good guy!

Will He Bring Something Valuable?

This 5x3 fun slot is a mixture of both classic and bonus features. It contains sixteen bonus games, as well as two feature boards and the Super Shot Zone where you can double the value of cash pot.

If luck is on your side, you could potentially gain up to 1000x your bet if you manage to play Ted’s Big Money additional round.

This game is under license from MRC II Distribution Company and it can be played in full portrait mode which automatically means upgraded and superb fruit machine experience!

This is the latest from them and it was launched right after the release of its recent, Deal or No Deal – The Perfect Play. Generally speaking, they are planning on releasing more attractive games similar to this one for those who enjoy thrilling gaming experience.

“We’re thrilled to be reunited with our favourite thunder buddy and deliver another exciting new addition to our Pub Fruit Series.

The original slot game featuring the beer-swigging teddy bear was a massive hit with operators and players alike. It made strategic sense for us adapt the gameplay into the pub fruit machine concept that will help tedTM appeal to a wider audience.”

It looks like a lot of their video slots are inspired by blockbusters. One of the recent ones, called Mars Attacks (based on the classic sci-fi movie) was developed in collaboration with Warner Bros.

They know that it is a proven recipe for success and positive reviews about them simply confirm what we (and everyone else) think.