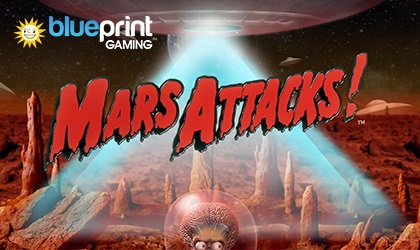 What better way to welcome this year, than to do it by releasing an interesting and creative video slot.

Blueprint Gaming was one of those companies that wanted to reward their loyal gamers by unveiling the slot called, Mars Attacks!

Something New and Appealing:

It is worth mentioning that they haven’t done this all by themselves. Namely, they partnered with Warner Bros. Consumer Products and made a game that was actually an homage to a homage to a popular sci-fi movie from 1996.

It doesn’t matter whether it’s a movie, book or in this case a game, when aliens are involved you must be prepared for some silly, unforeseen things. Furthermore, here you will bump into entertaining progressive bonus rounds, as well as Alien Invasion Gamble that allows the users to enhance the feature.

And That’ Not It:

Besides all these features, you will come across Martian Modifiers which offer 3125 pay ways! Since it’s the beginning of the year, Blueprint Gaming wanted to sweep their players off their feet by adding the Jackpot King Deluxe progressive jackpot system!

This multi-game system is equipped with two “must be won by” pots that will enable you a fixed value payout.

“We come in peace! Mars Attacks!™ is an iconic sci-fi film, and we are really excited to offer it to all of our partners and their players.

It’s one of our most engaging titles yet, with a multitude of bonus features and the possibility of defending the world against the alien invasion in a bonus mode. Fans of the film will be able to battle through progressive bonus rounds, with a giant finale fitting of the comedy classic.”

This isn’t the only game Warner Bros. Consumer Products along with Blueprint Gaming have released together.

Besides this 5x3 fun slot, they’ve developed Top Cat, Thundercats and their most recent one, called The Goonies. The last one actually achieved a lot of success!

Fruitful Year Behind Them – More To Come:

Those of you who are actively following their achievements and releases know how ambitious this company is.

In order to strengthen their presence in the world, they have grabbed game certification in the regulated markets of Romania and Denmark.

They have entered these prosperous markets with major hits like King Kong Cash, Genie Jackpot  and the Jackpot King progressive. All of these titles have become available in these regions for the first time and as it turned out, this was a very smart move!