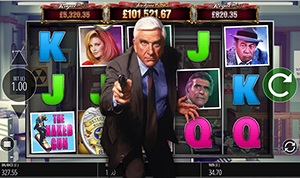 While the ABC television series, Police Squad, was cancelled after only six episodes, it went on to inspire three hilarious films, released in the late 80s and early 90s. The Naked Gun movies went on to follow police detective, Frank Drebin (played by Leslie Nielsen), and his outrageous, crime-fighting shenanigans. The films were such a success that, decades later, UK-based game studio, Blueprint Gaming, has decided to recreate the plot via slot game. That’s right, the brand is following up the release of its Jackpot King progressive jackpot system, with its HTML5 Naked Gun slot, after recently receiving a license from Paramount Licensing.

Whether or not you were a fan of the television series or films, you’re sure to be in for a series of laughs when you check out this crime-inspired title. It is made up of a 5x3 reel set, along with 20 paylines. The game stays true to the original storyline, delivering a variety of symbols, and impressive visual effects, representative of the film. Gaming symbols on the reels, include a police badge, baseball & mitt, and appearances from characters like Leslie Nielsen and Priscilla Presley.

As for what the game has to offer in the way of features, users can look forward to a total of four free spin games: Home Run, Stake Out, On the Edge, and Crime Scene free spins.

Blueprint Gaming CEO, Matt Cole, commented, “Naked Gun is a classic movie and we are thrilled to bring the franchise into interactive slots via our latest game release. It’s a fun and fast-paced slot that offers players plenty of chances to win big with four bonus games and expanding win lines.”

Cole added, “We have developed several slots using third party brands, offering players familiarity and operators exciting marketing opportunities. Naked Gun is a great addition to our portfolio and we are excited to be able to offer it to our partners.”