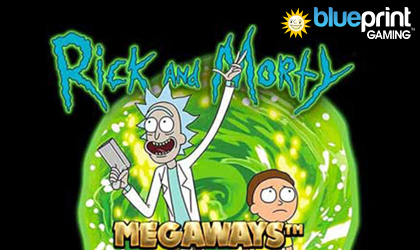 Blueprint Gaming, a casino developer and content provider, launches another Megaways title called Rick and Morty. This is a slot based on the Cartoon Network's Adult Swim series, where the scientist Rick and his grandson Morty go on great adventures. Fans of the series will love what the creative development team has done here. The game uses cascading reels and a megaways engine. This means that every spin is different as it is played on a 6x7 grid and has 117,649 active paylines.

Following in the Steps of a Popular TV Show:

There are loads of bonus features here that players will enjoy and there are 4 different extra spins bonus rounds available. Every bonus round has something different to offer and the soundtrack and graphics from the show are everywhere. The maximum in-game earning potential is 50,000x the bet, by the way, and there is a lot to look forward to with this high-volatility title combined with an RTP of 96.55%.

Jo Purvis, Blueprint Gaming’s Director of Marketing and Relationships said: “We’re getting schwifty as we release our brand-new game featuring the sociopathic genius scientist and his inherently timid grandson! Rick and Morty Wubba Lubba Dub Dub promises to be even more entertaining with an abundance of new features for players to experience. The design team have done a tremendous job in bringing the animated duo’s antics to life in this new version and we’re confident the game will prove very popular with players worldwide.”

The software developer, Blueprint, has started operating under the German Gauselmann Group. The provider specializes in the development of online games and mobile slot machines. Alternatively, some of its games at the land-based casino are available, considering they have over 100,000 stations in Germany, Italy and the United Kingdom. The company has been in the iGaming industry for 8 years and they demonstrated superior flexibility in the business. The brand has an open distribution approach, which means that all games are available online and offline.