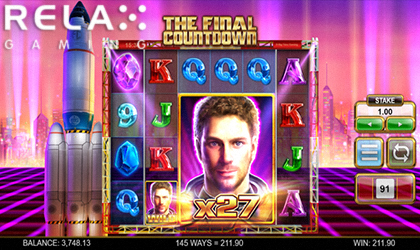 Who remembers one of the most popular songs from the 80s called, The Final Countdown? Those who do, know how exciting and full of tension this hit is. Now, Big Time Gaming has decided to incorporate this song into their latest slot of the same name.

As we stated above, the game is set in space and throughout and players will get to hear the melody of the iconic song from Europe.

One of the things that will further improve the overall experience is the sensational volatility feature that hasn’t been seen before. That’s why this slot is unlike any other!

Furthermore, this video slot will be delivered to various operators in markets across the globe by partners Scientific Games and Relax Gaming.

What Happens During Gameplay?

As soon as players launch the game, they will come across two astronauts. The first one is called Venus while the other one is Vegas.

They are here to help them enter the spaceship and embark on a journey to find some outstanding prizes that can be found in space.

The base game contains Cloning Reels as well as huge wilds that are inserted into the reels and represent the clones.

Their duty is to help users receive some big wins! A good thing about Cloning Reels is the fact that they can drop a plethora of scatters that can help them activate the feature.

More than three scatters in one place are triggering some serious action and that’s the moment when real fun begins.

Moreover, players then get two options; they can either choose Heading for Venus or The Countdown.

The countdown feature enables people to modify and enlarge the volatility of the game. Besides this one, the game comes with another feature called Cliff Hanging during which the last spin can help them have a full retrigger.

Other aspects of this games. This one comes with superb artwork, design as well as illustrations.

The symbols are well-executed and of course the most mesmerizing thing about it is of course, its soundtrack that brings so many memories.

“The Final Countdown is going to be a big one. It’s going to punch a hole in the sky as players launch towards planet big win with those iconic keyboard notes blasting away in the background.

The Big Time Gaming team has done a phenomenal job with this slot and it really is truly remarkable. The strength of the tune combined with the incredible math and state of the art mechanics has resulted in a slot that is out of this world.”

“BTG’s game launches are always accompanied by great anticipation and we are proud to be bringing The Final CountdownTM to players in partnership with Big Time Gaming. It is a game packed with innovative features to keep players engaged over extended play sessions, uniquely based upon the classic hit song that is well-known and loved by all.”