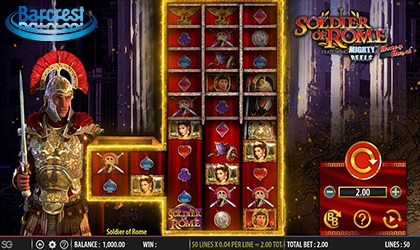 Barcrest powers some of the biggest slot games in the online casino industry, including progressive jackpot titles with mega cash, but their latest release boasts many different win lines and thrilling bonus features with an ancient theme.

Soldier of Rome is a 5-reel, 100-payline slot that will draw players into a world of big battles, from as little as 0.20 a spin. High rollers are able to spend up to 500.00 spin, to trigger greater cash rewards. The reels of the game are a unique formation…

which sees reels 1 and 2 being two symbols high and the remaining reels (3, 4, 5), bearing 10 symbols each – this design gives the ability to hit wins on 100 paylines.

The symbols on the reels are in keeping with the theme of the game; a queen, a king, a fierce soldier, chariot, ancient coin, eagle, coat of arms, card patterns (diamonds, spades, clubs and hearts) and a game logo in purple and red can be found upon the reels.

To trigger the bonus feature, the fierce soldier must be present on reel 3… this awards the Mighty Reels feature and sees the soldier (wild symbol) cover three standard symbols. The soldier (wild) will expand to fill the whole reel: if it lands in full view during the base game.

Three or more ‘Soldier of Rome’ symbols (these symbols can appear with a soldier on or not, but three or a kind is required) will start the free spins feature. The maximum number of free spins awarded will be 25. During the spins, a soldier appearing partially on reels 3, 4 and 5 will trigger the Mighty Reels.

Soldier of Rome is certainly a fun-filled creation with plenty to keep you on the edge of your seat. This medium variance slot will trigger regular base game wins, but you will have to play for sustained periods of time in order to see any of the bonus features come into play… unless you’re willing to spend big cash on the Big Bet bonus feature.

Relive the Fun of Fruit Slots with Burning Aces by Evoplay

Check Out Vibrant Visuals and a Catchy Soundtrack in Animal Madness