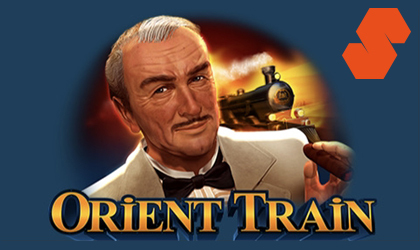 The Orient Express was a European rail route that will most likely take us around Europe and into Asia. It began operations in the late 19th century, and it has been a popular choice for tourists since then. The latest release from Swintt gets its inspiration from this, and is titled, Orient Train. During play, the star of the show is a steam engine that acts as the scatter symbol.

The title is played on 5 reels, 3 rows, and 5 active paylines. Up to 1,000x the bet is the maximum potential win and you're looking at a slot with an RTP of only 95.16%. At the minimum level, 5 coins are required to start the game, and the maximum betting option is $100. As for the bonus features, expect scatters, wilds, extra spins, and the railroad feature.

The game is the latest slot in Swintt’s popular series and comes with beautifully designed visuals and hugely rewarding bonus features!

Chief Commercial Officer at Swintt, David Mann, commented: “With Swintt’s new Orient Train release, we’re going full steam ahead as we invite players to ride the railroad to riches and punch their ticket for the chance to win one of three local jackpot prizes. As the latest slot in our popular Premium series, Orient Train combines the simple pick-up-and-play appeal of a land-based casino slot with beautifully designed visuals and a hugely rewarding Railroad Feature – and we’re very much looking forward to welcoming players aboard in the coming weeks!”

Swintt maintains an objective of being a leading supplier of gaming content to the online gambling sector by leveraging expertise and experience. While there is still a long road ahead to reach this objective, it is on the correct route and its high-quality slots like Battle Heroes, Heart of Earth, and Wild Wild Witch are receiving increasing attention from gamers. Its casino games are already appearing on very popular and well-known gaming platforms like GiG and EveryMatrix. Its library is constantly growing, and business grows with it. Considering it launched in 2019, it has come a long way.