Yggdrasil Brings Action to the Reels with Age of Asgard Release 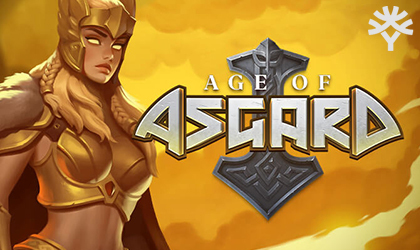 Yggdrasil, one of the largest Nordic software providers, has announced a release of a brand-new slot game titled, Age of Asgard. The new game features…

…a theme that matches this company’s heritage. It takes players on a divine adventure that incorporates various details from Norse mythology.

Yggdrasil is one of those brands that pride themselves on delivering innovative features to players who refuse to compromise. When said features are wrapped up in a highly immersive theme, the whole game gains a new level of entertainment value. This offering takes place in a Viking village somewhere in the cold north.

The scenery depicts what appears to be a monument to two champions sitting in the middle of said village. On one side is the Viking champion illuminated by the warmth of a nearby fire while the opposite side represents a fallen warrior lit up by a cold, blue flame.

The setting of the slot is made complete by the animated snow that adds to the suspenseful atmosphere. Symbol design is interesting, to say the least.

The studio behind this release went with two distinct tiers of symbols – lower-paying, simplistic ones that feature card suits, and the higher paying tier that depicts various characters. The most interesting part here is that the higher-paying tier of symbols stretches across entire reels.

Speaking of reels, this title features an innovative, dual reel design. In other words, it comes with two 5x3 grids. Since most symbols stretch across all 3 rows, there is a sense of balance within the game. As far as special features go, this particular game offers a fairly tame selection of bonus spin modes.

The only unique special feature is the Randomizer which is triggered when 5 out of 6 bonus spin symbols drop on the reels. This feature will turn regular bonus spins into Ragnarok bonus spins or award 1000 coins to the player.

Natalya Ovchinnikova, Product Owner Slots at Yggdrasil, said the following of the release: “We are delighted to release our battle-filled extravaganza, Age of Asgard. With an incredibly immersive setting and two reels working in tandem, the game is filled with exciting features, and of course the ground-shaking Ragnarok Free Spins. We can’t wait to see how the game is received by our fans and operating partners across the globe."

Aside from specializing in high-quality slot games, it also operates a large platform that cooperates with a number of the top tier, 3rd party software providers.