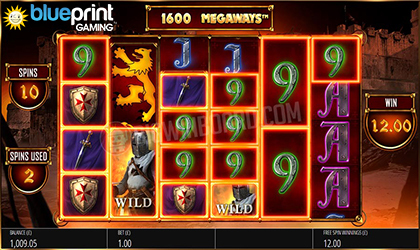 Unfortunately, a time machine is not at our disposal, however, with the help of creative minds we can go back to the past and witness some mesmerizing events.

The latest title from Blueprint Gaming is titled, Valletta Megaways, and it was inspired by the Medieval period. Gamers are sent back in time in the middle of a castle blockade where everything is in complete disorder.

Furthermore, this 6x5 slot comes with reels that abound with various weapons from that period of time, such as cannons, swords and arrows.

If at least three cannon characters are seen on the reels, the detonating casino spins round is going to be activated, during which every single win blasts-off a streak and winning icons stay in place.

On each winning spin, the Arrow Storm feature is randomly triggered, exposing the reels to a bunch of arrows, which fix random characters in place and give players the opportunity to have more spectacular winnings.

As you can probably assume, this video slot is their latest gaming edition that comes with a Megaways mechanic, under license from Big Time Gaming which gives users approximately 15, 625 ways to win.

Jo Purvis, Director of Marketing and Relationships at Blueprint, stated:

“Players will have to battle through the reels to win big in Valletta MegawaysTM, which promises to be one of our most action-packed slots to date.

With its immersive and fiery bonus features, we’re looking forward to our latest release going live across our fast-growing network of operators.”

A few days ago, Blueprint released their portfolio with Svenska Spel Sport & Casino, which means that this operator has drastically upgraded its selection of products after this collaboration.

Ultimately, some of their most popular games are going to be included into their offering, such as Genie Jackpots, Diamond Mine, Buffalo Rising, as well as an award-winning game, The Goonies.

Now, the established operator will be able to give its loyal players a more diverse assortment of video slots, while at the same time, attracting new ones.

Sior Walbyoff, Head of Business Development, commented on this collaboration:

“We’re thrilled to be offering our casino games at Svenska Spel Sport & Casino. In the past year Blueprint’s presence in the Scandinavian market has grown rapidly and we’re seeing our games become a solid favourite amongst players of our operator network.

“Adding high-quality games to our casino offering is a high priority for Svenska Spel Sport & Casino and integrating Blueprint Gaming’s slots portfolio made strategic sense for us.

Blueprint Gaming has developed a strong reputation for producing exciting games and we’re thrilled to be offering them to our players for the first time. In what is an increasingly competitive marketplace, making world-class games available will provide us with the competitive edge.”