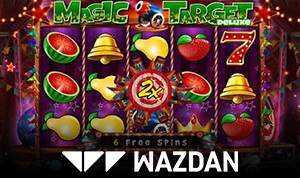 Casino games provider, Wazdan, has gone live with two new titles: Magic Target Deluxe and Fruit Mania Deluxe. Since the start of the new year, the Malta-based brand has already gone live with ten new games, and shows no signs of slowing down, even landing a stand at this year’s ICE event in London. Previous titles released in the last month include Fruit Fiesta, Dracula’s Castle, Book of Magic Deluxe, Tetra Mania Deluxe, and more. Last year proved quite the year for the supplier as well, with a grand total of 18 games launched throughout 2017.

Magic Target Deluxe serves as a prime example of the supplier’s use of HTML5 technology, complete with remarkable animations and smooth compatibility on all devices. It is made up of 5 reels and takes its inspiration from the retro slots of the past with a hint of circus fun. A top prize of up to 500X the bet is up for grabs, along with a chance to trigger free spins.

The second new slot, Fruit Mania Deluxe, delivers 9 reels, along with lucrative features such as free spins and bonus rounds. Among the gaming symbols creating the layout include Vegas signs, lotto tickets, and diamonds.

While Wazdan has gotten 2018 off to a running start, there’s still more to come, with upcoming titles already announced. Keep an eye out for Mayan Ritual, Los Muertos, Captain Flynt, and more.

Experience the Thrill of 9 Burning Dragons from Wazdan