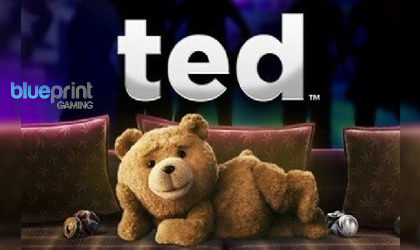 Blueprint Gaming has announced that they have added Ted™ to their list of slots belonging to the Jackpot King series. The new game will bring an all familiar…

…experience in a new package. Also, there’s ted and he is all kinds of fun, especially if you appreciate his crude sense of humor.

Bringing a Familiar Face Back to Life:

This software provider has done numerous Hollywood inspired slot games in the past. In fact, ted™ is just the latest one to be added to this group…

…within the brand’s portfolio. This company has had a lot of success with another similar release that is also a part of the Jackpot King series – The Goonies™!

The theme in this one is quite simple, yet it achieves everything you’d want it to. The whole action takes place in the living room, on a couch – the stuffed bear’s favorite place to hang out with his best buddy.

While the reels are spinning, he is pictured taking a nap on said couch, surrounded by empty beer cans. Everything indicates that he had a rough night and that he’ll have a few wild stories to share in the morning.

Symbol design features simple card royals for the lower-paying deck while the higher paying deck comes in the form of a six-pack of cola, an angry-looking goose among other.

The core mechanics that are running this entire slot are rooted in a 5x3 reel layout. The developer decided to utilize 20 paylines, making this whole experience rather tame at first glance. However, we are quickly reminded that…

…this is indeed a Jackpot King slot. That means players have a chance to hit the jackpot in a game that has already made quite a few millionaires in the world.

As far as special features go, this offering packs a mean punch. Namely, there is the Wheel of Fartune, Bar Crawl Bonus, S-Mart Bonus Spins as well as Ted’s Big Money. All of these features are more than capable of potentially turning this game into a very thrilling ride.

Jo Purvis, Director of Marketing and Relationships at Blueprint Gaming, offered a comment regarding the new release: “We’re excited to bring everyone’s favourite thunder buddy to the Blueprint Gaming Jackpot King series. We’re sure that this title will prove an instant hit among players, who will relish the chance to join the free-spirited teddy bear in pursuit of massive prizes.”

Blueprint is a slot game specialist dedicated to delivering more compelling and engaging games to the iGaming industry as a whole. This brand currently operates as a part of Gauselmann Group, which has recognized its potential early on and decided to add their creative capacities to their own system. As a result, the brand now has access to a massive source of experience and resources necessary for them to keep building engaging games.