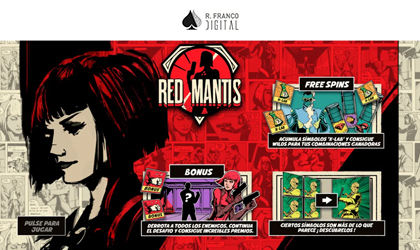 R. Franco Digital, a leading game provider in Spain, has announced the launch of its latest exhilarating adventure called Red Mantis. The game is now available through Wanabet in Spain and worldwide through the developer’s network of international operators. This is a 5-reel, 3-row slot with 20 active paylines, plus several bonus games.

Tasked with infiltrating the top-secret X Laboratory, a hidden laboratory filled with villains and notorious scientists who will do everything in their power to keep their evil inventions unknown and only the most courageous agents will be able to save humanity. The slot delivers a perfectly responsive design optimized for the web and mobile devices. The game is available to punters in the licensed markets of Spain, Colombia, Malta and Curacao.

Commenting on the launch, Mario Benito, Commercial Director for the brand said: “Are your players ready for this top-secret mission? Should they choose to accept it, Red Mantis is guaranteed to offer an adventure that will have even the most experienced slot veterans on the edge of their seats – and we’re delighted to launch one of 2020’s most exciting games. After close to a year’s hard work, we can promise that Red Mantis will see only the bravest persevere. Each player will have the cunning Red Mantis by their side to see them through – a spy with whom death-dying adventure is a piece of cake. We wish players good luck and hope that they come back in one piece!”

R. Franco Digital is a global gaming provider established in 2014. The company is part of Recreativos Franco Group, a pioneer of slots, launched in Spain in 1965. The company strengthened its position in Spain and began to expand internationally, starting to place machines in Norway, Sweden, France, the Netherlands, Russia and the United Kingdom, Italy and more. They held 50% of the shares of Codere, which later changed the name to Grupo Codere.

At that time, they created R. Franco América and are active in almost all Latin American countries. The following years were full of success and with the launch of the digital division in 2014 they developed into a group of omnichannel games in Spain. More than fifty years of experience has provided the company with excellent service for the online marketplace and helped stimulate other entrepreneurs through the local business incubator and accelerator Wanajump. While the parent company still manufactures arcade and bingo games, and a full line of casino slots, electronic roulette, the digital division is now focusing on land-based and online games and services.