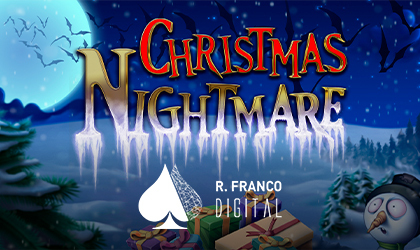 R. Franco Games, an online casino provider, brings an exciting online slot, Christmas Nightmare. The funny and unusual Christmas-themed slot tells the story of Christmas nightmares where the main characters are spiders, elves, Santa, snowman, and deer. This Christmas adventure offers 5 reels, 3 rows, and 25 active paylines. This online slot comes with medium volatility and the game’s best odds are 96%, which is above the industry average. Wager-wise the minimum betting option is $0.25, while the maximum is $150. The maximum potential win is 500x the bet and there are bonus features such as scatters, wilds, stacked symbols, and a bonus game.

Highly Productive Year for the Company:

Christmas Nightmare is the latest online slot added to the renowned R. Franco Digital slot library and this game is available on all platforms and translated to Spanish and English!

Commercial Director of R. Franco Digital, Mario Benito, said: “We tasked our talented team with producing a festive cracker and they have certainly come up with the goods again in Christmas Nightmare. It’s a fun take on a classic theme, with a few frights and plenty of big-win potential. Players all over the world have already responded positively to the release, which comes at the end of another highly productive year for R. Franco Digital.”

R. Franco Group is a global game provider established in 2014. The company is part of Grupo Recreativos Franco, a pioneer of slots, established in Spain in 1965. The company strengthened its position in Spain and began to expand internationally, starting with locating machines in Norway, Sweden, France, the Netherlands, Russia and the UK, in Italy and other countries. It owned 50% of the shares of Codere, which later changed its name to Grupo Codere. At that time, they created R. Franco América and are active in almost every country in Latin America. The following years were full of success, and with the launch of the digital division in 2014, it developed into an omnichannel gaming group in Spain. More than fifty years of experience has provided the company with excellent service for the online marketplace and helped other entrepreneurs through the local Wanajump Business Incubator and Accelerator.