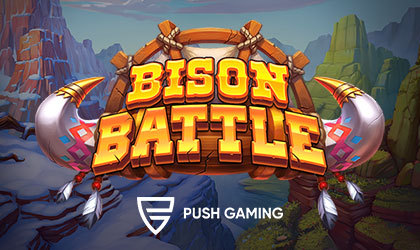 With a new Push Gaming casino slot, punters have opportunity to see the breathtaking animals of North America. The wilderness sets the scene where wolves, bears, eagles, lynx cats, and bison can generate huge prizes. The American buffalo, also known as bison, is a creature that has long been linked with profound spirituality, liberty, and tremendous power. As for the symbols, there are the lower-paying ones such as spades, clubs, hearts and diamonds while the higher-paying symbols are an eagle, a wolf, a lynx and a bear.

Bison Battle offers a layout of 5 reels, 4 rows, and 20 active paylines. Wager-wise, the minimum betting option is $0.1 while the maximum betting option is $100. The game's best odds are 96.41%, which is higher than the average RTP, however, due to customizable RTP ranges, this percentage can be adjusted by some providers. This slot promises a maximum potential win of 50,000x the bet and there are several bonus features such wilds, scatters, random prizes, multipliers, bison clash feature, a bonus round, ice park feature, and extra spins.

If you want something fun, exciting, and challenging, but not too difficult, then Bison Battle might be a great option!

CEO at Push Gaming, James Marshall, added: “Our team has done a fine job with Bison Battle – they’ve had great fun putting together a game that is snappy and endlessly entertaining from the base game through to the second screen features. Our Bonus Buy feature makes an appearance too, adding yet more options for players to enjoy the action. We’re really looking forward to seeing our fans challenge the battling bison!”

Push Gaming is based in the UK and creates gaming software for online casinos. The company's goal is to link and distribute conventional gaming items for online casinos and mobile platforms. By developing high-quality games, the supplier aspires to raise the bar in the business. Its masterminds are Marshall and Lee. They launched the company in 2010 and released great games like Blaze of Ra and Jammin Jars, which are licensed by the Alderney Gambling Control Commission and the United Kingdom Gambling Commission. Players can be assured that they have taken all necessary steps to maintain fair play following the law. The company has a constantly expanding gaming lobby filled with games fully optimized for mobile devices.

Retro Tapes Slot is a Blast from the Past