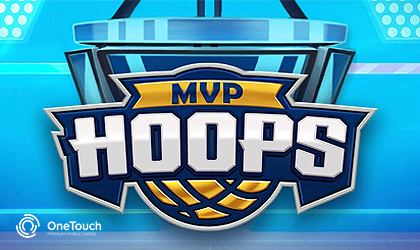 OneTouch has revealed its brand-new MVP Hoops slot. The gameplay is quite addicting. The point is, when three bonus spins symbols hit a payline, six extra spins are triggered and players gain access to the ingenious Wheel Bonus feature to generate three bonus spins. The title also has cascading features: winning symbols are replaced on the reels with new ones, giving players a great chance to win more prizes. The novelty builds on the brand’s success with the introduction of well-known versions such as Flexing Dragons and Tiki Terror to the supplier's mobile concepts platform.

“We’ve left it all out on the court in the newly announced dynamic slot title , MVP Hoops. With a cutting-edge bonus feature, an inviting theme designed with sports fans in mind and the chance to get massive wins on the score board, we have no doubt that it will prove a hit.”

Founded in 2015 and based in the Isle of Man, the developer delivers a small but extending selection of games. The company's website says the team started with the idea that somebody is playing a game with one hand while the other is holding onto the bus or train rail.

They also have an office in Ukraine, where the most creative work occurs. They have games such as blackjack, baccarat and wheel of fortune, which confirmed to be very popular in Asia and Europe. The company is now moving towards the development of slot machines. It is hard to produce the best mobile games at this point better than this brand.

The reason is the combination of graphics, style and most importantly usability and interface. A Retina-enabled device simply uses newer and better technology to compress more pixels in the same screen area. OneTouch games and software use this technology to enhance everything. However, it is difficult to imagine a device going back in time, which means that it became the standard format for all online digital images. If you are looking for sharper, clearer images without blinking or stuttering - and your device can do that – this brand’s titles are a pretty good choice. They are licensed in Malta and the United Kingdom, two of the most recognized and most trusted jurisdictions.