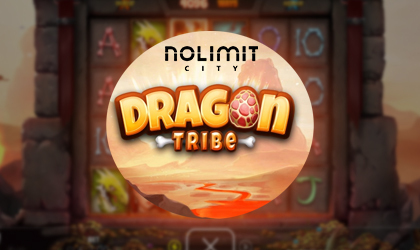 The current year, which is counting down its final days seems to be quite successful for the creative team of Nolimit City. The marked the final month of it with Dragon Tribe, the twelfth video slot introduced during 2019.

Thanks to the cascading reels, and a duet of inventive and highly-dynamic options which debuted in one of the previous releases, punters can expect challenging and unpredictable gameplay. The visually-appealing dragon-themed creation is available to the vast selection of studio’s partners starting December 12.

Per Lindheimer, Product Owner at Nolimit shared his thoughts on the most recent extension of the catalog:

“Producing a cascading slot with both xWays® and xNudge® has been an exciting challenge to tackle, and gave us the opportunity to create an explosive slot with true win potential. Making the player select his preferred version of Dragon Spins bonus mode, brings something truly unique to this game.”

Thanks to the studio’s signature features, xWays®, and xNudge® and the actionable cascading structure, punters can expect fast-paced gameplay full of challenges and twists. Structured as a 4x6 grid, it comes with 4096 ways for possible winning combos.

… across the continuously growing set of reels, which will boost the chances for more winning combinations during every round. These icons randomly drop, increasing the reel size to almost unlimited potential.

When cascading winnings are connected with a downward multiplying symbol xNudge®, the possibility to create winning combinations becomes even bigger, giving the entire potential of 27,000x win.

… where the punters are given the chance to pick one of the two offered volatility types. Those are the ‘win more often’ mode and the ‘high risk, high potential’ mode, each of them with a different rewards system, based on individual play style. Each set of three consecutive wins will result in another two added rounds and more dragon wilds on screen.

The Eternal Battle Between Good and Evil:

As already mentioned, the duo of features with innovative mechanics was primarily introduced in Pixies VS Pirates, a topic which brings one of the all-time popular topics, good VS evil battle. Taking punters to the high, dangerous seas…

…the game represents a picturesque adventure with a fine number of versatile details and well-animated characters. It’s optimized to work on all types of devices.

Among the most noteworthy titles to mark the year, Manhattan Goes Wild takes quite a high place. The beautiful homage to the roaring twenties and Art Deco style is equipped with plenty of sophisticated features. Energy-boosting Hot4Cash, its 2-3-3-3-2 reel setup with 4 Hot Zones sets the reels on fire with a high dose of action and vibrancy.