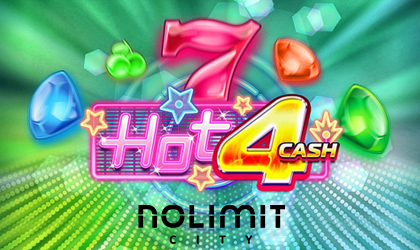 Nolimit City, a premier content provider for the iGaming industry, has just released a new game…

…titled Hot4Cash. The studio behind this release claims that the game brings a whole new angle to the slot game market.

With several interesting special features, the latest release is bound to attract players who prefer the more unique titles.

Nolimit’s latest slot release is rooted in an attractive yet abstract theme that takes players on a neon adventure. The team behind the game has used bright colors to pique the interest of those who play the game. Despite being rather flashy, it isn’t distracting in terms of visuals.

However, it is arguable that the base game mechanics are what makes this title so interesting. Nolimit City went with a 2-3-3-3-2 reel setup with 4 Hot Zones.

Extra spin mode awards players with 7 additional spins while there is also a chance to retrigger the feature.

Colossal Spins are a whole different beast and are triggered when four identical symbols land on all hot zones. Once triggered, reels ranging from 2-4 turn into one colossal symbol while reels 3 and 5 continue spinning. As the player spins the reels…

…the colossal symbol acts as a substitute for whatever winning combo gets drawn on the reels.

Another interesting feature is the symbol design. The studio behind this game has decided to use the classic fruits and lucky seven symbols for both higher and lower-paying section. They’ve done this by using the same symbols of a different color. Although it adds a hint of confusion at first, such a decision makes this game fairly unique.

Per Lindheimer, Product Owner at Nolimit, offered insight on the new title: “Hot4Cash is a game built solely around the features and its innovative trigger feature, highlighted within the 4 Hot Zones which are constantly present. With an exciting individual reel stop and high paced vibe, this machine will really make your heart and booty bounce to the beat!”

Nolimit is an international software provider with more than 10 years of hands-on experience in the industry. They offer what are arguably some of the top slot games on the market. All of their content runs off of their gambling platform that boasts fast and easy integration as well as flexibility. Their entire philosophy revolves around the operator and satisfying their needs.

With such complete solutions, the developer has become the go-to provider for a number of top tier operators from around the world.