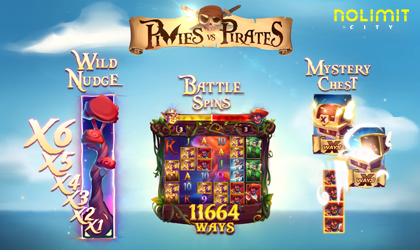 Nolimit City has announced the release of their latest game titled, Pixies vs Pirates. The company is also debuting its latest base game engine that includes innovative features and more.

Titled xNudge, the new base game introduces innovative mechanics that give depth to the offering.

Trouble on the High Seas:

The latest release from Nolimit City takes players an adventure on the high seas. The company found an interesting way of creating an enticing atmosphere with a theme that doesn’t dominate the entire experience. The background for this title depicts the open seas seen from the deck of a ship.

That alone isn’t doing much in terms of immersion, but the fact that the whole ship is animated and depicts the rocking of the ship as it traverses the waves in a believable way, definitely does. Also, the animated, spinning helm that sits above the reels also helps in this regard.

Speaking of reels and frame design, the Sweden-based development team went with a cartoonish style that represents a worn out, wooden setup. Despite being rather simplified, the whole scene fits into the overall theme of this slot.

Where the title truly stands out from the rest is the new base game mechanic developed by the supplier. It expands the somewhat standard 6x3 reel layout by adding the xNudge and xWays feature.

Those features aside, this game features 729 fixed ways to win, which ultimately opens up a chance for players to potentially win 11,000x the original bet.

xNudge brings the signature nudging stacked wild that will increase the multiplier with every nudge. On the other hand, xWays brings a random symbol on the screen that can…

…randomly duplicate to increase the number of ways you can win for the entire screen. Per Lindheimer, Product Owner at Nolimit, offered a comment regarding the new release: “Pixies vs Pirates is our first release with our new xWays feature mechanic, merged with the previous smash hit mechanic xNudge! The two together can create thrilling spins with huge potential! With stunning graphics, especially in mobile portrait mode, this game will keep you on your toes both in the main game and the free spins mode!”

Pixies vs Pirates will be available for real money play in all partnered online casinos.

Nolimit is a company with more than 10 years of experience in the industry. They currently offer a number of critically acclaimed slot titles as well as a completely independent content platform that delivers centralized control and easy management of existing content, various promotion tools and more.

The company currently has a presence in Malta as well as Sweden and India where they have developer teams.

For a brand of this magnitude, the developer has proven to be one of the most flexible software providers in the industry. Because of this, they have gathered a large portfolio of top-tier operators with which they cooperate.