Lightning Box Brings Out the Big Catch in Extreme Fishing 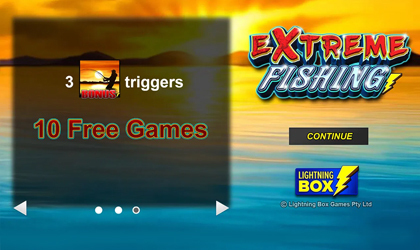 Are you ready for a fun summer adventure? If so, Lightning Box is taking players on a sweet fishing expedition in their latest release titled Extreme Fishing.

Fans of catching fish out on the open waters are in for a treat that brings a great theme paired with potentially lucrative prizes.

The game features a theme that does a great job capturing the sensation of sitting out there on the open waters, rocking in a boat, and waiting for a record-breaker to bite on that bait. Fans of fishing will most certainly feel at home.

…theme design in the new title adds to the immersion, especially when you activate the fishing feature, but more on that a bit later. As far as symbols go, players can look forward to card royals in the lower tier while the higher tier of symbols includes all kinds of fish crabs and other fishing inspired iconography. It’s also worth mentioning that the background changes depending on which feature is active at any given moment.

The Art of Fishing:

This latest release is a standard 5x3 slot as far as the base game is concerned.

…game’s features. That being said, there aren’t too many, to begin with. The team behind the brand has included the usual bonus spin mode where players need to collect 3 or more scatter symbols in order to unlock 10 bonus spins.

One of the most interesting features is the Fishing Feature. To trigger it, you’ll need to land 5 marlins in a single spin. The feature puts you behind a fishing rod where you need to reel in the big catch carefully. Go too fast and you’ll lose it, go to slow and the fish will lose its interest.

Last but not the least…

…there’s the Shark Attack feature that is triggered completely randomly during the base game. Once that happens, random symbols will turn into wilds for that one spin.

Peter Causley, CEO and co-founder of the brand said: “We’re hoping it will be hook, line, and sinker for players in our new release Extreme Fishing. The latest addition to our portfolio is sure to appeal to those looking to claim some big prizes with the exciting Fishing Feature.”

Lightning Box is one of the more innovative names in the business. Founded in Australia, this small team of professionals is working around the clock to bring thrilling new math models and in-game features to the masses worldwide.