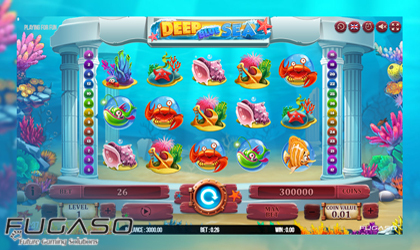 Recently we welcomed spring, but that doesn’t mean that we can’t look forward to seeing summer and all its charms.

To make sure we prepared ourselves well for this season, one of the most aspiring game development studios, Fugaso has developed a perfect game for this occasion. Let’s learn more about it!

At first glance, it may seem very childlike, but this game offers quite interesting features that are going to engage players.

As you probably assumed, it takes place in an ocean bed with a lot of silly and quirky characters decorating the reels.

It is equipped with five reels and twenty-six pay lines that are set inside the remains of a magnificent temple.

The entire screen represents a coral reef with wonderous tropical fish swimming among the plants.

Besides them, other characters include relaxing anchors, an animated puffer fish that brings several wilds with a cheerful shark, as well as a wild bursting through a bronze porthole who monitors if multiple automated wins in succession are going to appear.

This game brings a plethora of surprises, such as substitutions, a re-spin feature, casino spins and bonus games.

Probably the most entertaining character is the bonus icon. It appears in the shape of a huge pirates’ chest that contains treasure in the form of gold doubloons topped with several strings of pearls.

All these things remind us of a typical warm, summer day we usually spend at the beach. Furthermore, this video slot has a medium volatility with an RTP of 96.00 %. Sound effects such as bubbles, a xylophone and many others amazingly contribute to the overall atmosphere.

Reasons To Play This Game:

There are number of them but we would like to accentuate its dynamic features, along with charismatic characters. The good thing about it is that it comes in several languages, intended for people in different parts of the world. It contains English, French, German, Italian, Portuguese, Russian, Turkish, Norwegian and Swedish.

Moreover, we mustn’t forget to mention the swirl of bubbles feature that whirs around every winning symbol.

At this year’s ICE event, the brand proudly showcased its superb portfolio that is filled with entertaining games, such as: Stoned Joker, Brave Mongoose, Super Hamster, Warlock’s Book, Power of Asia and Book of Tattoo.

Furthermore, they also released the highly-anticipated Trump It Deluxe, a game that quickly became extremely popular among players and operators.