Explore the City of Ancients in Riches of Babylon by Greentube 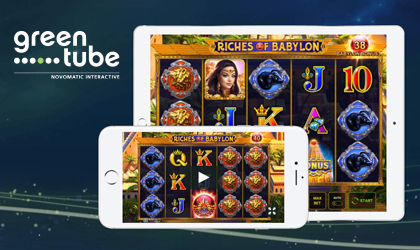 Greentube, a NOVOMATIC Interactive division, has announced the release of a brand-new game titled Riches of Babylon.

With a majestic theme and an awesome soundtrack, the…

…game does a great job of bringing this ancient city back to life! Those who are looking for a potentially thrilling gaming experience are in for a treat as well!

The Riches of Ancient Civilizations:

The developer has been on a streak with their releases this year. The latest title represents one of the best-looking titles out there. The game comes with a theme that perfectly matches its name. They’ve recreated the ancient city of Babylon in all of its glory, including the tower of Babylon. The symbols come in the form of two separate tiers.

Topping things off, the team behind the supplier has created a very smooth soundtrack that will almost transport you back in time to the era of Babylonia.

The Powerful Semiramis and Her Treasures:

The new release is based on a 5x3 reel grid that runs on 25 fixed paylines. The game’s core mechanic is considered to be fairly volatile. However, those who are looking for something more are in for a treat!

There are two special feature modes in this slot. The first one is the Bonus Spin mode while the other one is the Ruby Sphere feature. The bonus spin mode is special for more reasons than just the extra spins.

…the game takes players to the tower of Babylon which spins to reveal the number of bonus spins awarded as well as the multiplier value that will be attributed to each spin.

The Ruby Sphere feature can increase the Babylon Bonus Jackpot by 1 or increase it by 1 while also triggering the bonus spin mode. Overall, the game is packed with pretty decent features that can properly make someone’s day if they’re lucky enough!

Greentube is a division of NOVOMATIC Interactive that is responsible for creating some of the most immersive slot games currently available on the market. The company was founded back in the mid-'90s and has entered the gaming industry in 1998. That’s the year when they released a 3D sports game called Ski Challenge. Today, it is a figure of authority when it comes to iGaming. The company is working with some of the most prestigious online casino operators around the world and is constantly looking to expand that list with new names.