Check Out the Latest from Quickspin 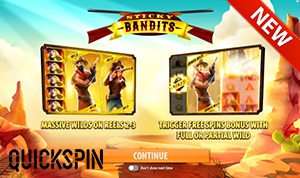 A new slot from Quickspin is live and ready for real money play. The Swedish-based brand has launched its latest title, Sticky Bandits. It is a Wild West-themed slot, offering up a 5x5 reel set. For those who have been following the brand’s most recent initiatives, the game acts as the latest to feature its exclusive Achievements Engine, designed specifically with player enjoyment in mind.

The Achievements Engine enables the supplier’s titles to include six game events, each boasting opportunities to earn tokens. They may be both earned and cashed in via any of four levels. Cashing them in can lead to free spins or the triggering of other exciting features. It’s easy to keep track of where you’re at during play, because the slot comes equipped with a convenient method of tracking progress.

Impressive graphics complement the HTML5 game. Its theme is that of a couple of robbers plotting a runaway train heist in the desert. Among the added features to look forward to include a free spin bonus, initiated by the bonus symbol and any wild symbols. There are two wilds to look out for during play, and they are represented by each of the robbers.

“Sticky Bandits promises to be yet another smash hit taking players on a rollercoaster ride across the heart of the desert. This cowboy themed game is also the latest Quickspin to feature our newly-launched Achievements Engine, a ground-breaking gamification module that has proven to be very popular with players,” commented Quickspin CEO, Daniel Lindberg.

Quickspin Takes a Stroll Down Memory Lane in Diamond Duke

Embark On a Mythical Journey in Arcane Gems by Quickspin

Navigate the Jungle and find Treasures in Panthers Reign by Quickspin

Find the Hidden Jungle Treasure in Panthers Reign from Quickspin