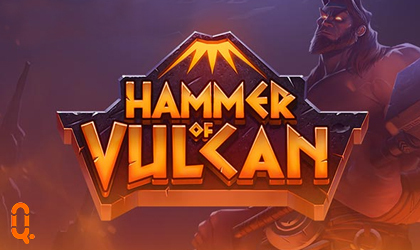 Quickspin uses massive artillery with Hammer of Vulcan, a game buried deep in the depths of Sicilian Etna. Vulcan might as well be the god of heavy metal if he lived in our time - at least that seems to be his preference, judging by the aggressive guitar audio in the background.

The provider chose to enable a bonus buy option, which means that impatient players don't need to get into the main game if they don't want to, and the price is suitable compared to many other similar slots. As tempting as it sounds, the base game can also offer nice payouts, especially when Vulcan puts his huge hammer on the anvil, creating wilds on the reels.

The title comes with 6x4 grid and 4096 active paylines. This is a high volatility game with a below-average RTP of 95.81%, while the maximum potential win is still an impressive 20347x the bet. The betting range is wide and suitable for every type of player, and it goes from a minimum bet of $0.1 up to a maximum $100.

The new release is especially concentrated on the bonus rounds and every time a player gets one or more hammer symbols on the reels, the main character will use its massive tool and turn all symbols in the hammer slot into regular wild symbols. This will create large piles of wilds many times over, which helps players increase payouts.

“It became clear early on that the God of Fire and his dangerous forge would be perfect match for the thrilling math with expanding wilds and these kinds of volatile free spins. I really wanted the player to feel the weight of the game, plus the excitement that any spin could lead to a huge win – you don’t have to wait for the Free Spins to get rewarded. I also wanted the player to be on the edge of their seat with every bet and the team definitely made this happen!”

Quickspin is a successful company based in Sweden. It was developed by Playtech in 2016, and since then has continued to produce the same high-quality games. Its offer includes flexible extra spins to attract new players, which allows players to enjoy a free bonus round. Since its beginning, the company's video slots have attracted the attention of casinos and players. The popularity of their games such as Gonzo's Quest and Mega Fortune continues, and new games are eagerly awaited. Six unique in-game events make the game even more fun as players are rewarded for reaching the set milestones.