Navigate the Jungle and find Treasures in Panthers Reign by Quickspin 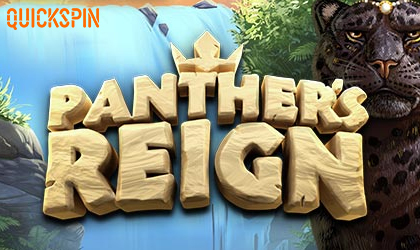 Quickspin, a popular software development studio that is known for its slots, has released a brand-new game called Panther’s Reign.

Set in the deep, triple canopy jungles, this game brings a variety of cool features as well as a theme that is simply gorgeous.

When the Jungle Comes to Life:

The developer has decided to take players on a wild ride through South America. The new game features an interesting theme that is tastefully loaded with subtle animations. The first thing that players see when this game loads up is the lush greenery. The team did a great job of creating a background that accurately depicts what it’s like to be stuck in a jungle.

They’ve done this by having more than one background. During the base game, players are presented with a sunny view from what appears to be a hidden cove. Both sides of the reels are surrounded by thick foliage while the view in the distance reveals a lake.

However, once the mode changes in this slot, that same sunny view turns into a rainy, gloomy scene with a thunderstorm raging in the distance.

Symbols come in two tiers. The first one is the lower-paying tier that is represented by card suits. Then come various gems and finally an assortment of wild animals.

The 5x4 slot runs on 50 paylines. As far as special features go, there are several which are simple yet effective in terms of win potential. To start things off we have the standard bonus spin mode that is activated by landing 3 or more scatters on the reels. The next big features is the Wild Spray.

Once triggered, this feature brings…

…up to 10 wilds to the reels for as long as the feature lasts.

Quickspin is a Swedish slot game specialist that offers some of the highest quality titles in the industry. The studio boasts a large number of awards boosting its reputation in the industry.

The team is always looking to push the boundaries of gameplay and features, offering its users innovative game mechanics. This type of attitude towards game creation is exactly what has allowed this brand to grow intone of the industry’s leaders.

So far, they have been successful in staying on the cutting-edge of the industry. Always looking for new partners, the brand is expanding its horizons and acquiring new user pools all around the world. The release of this latest game has assured the market that the brand is still grinding hard and following a very strict release schedule for new slot games.