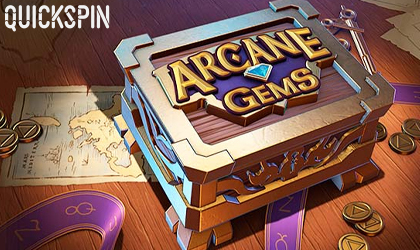 Quickspin, a popular software provider in the iGaming industry, has announced the release date for their latest slot game – Arcane Gems.

The studio will be dropping the game on June 9th and is thrilled to get feedback from its massive audience.

The latest game to come from the developer has just received an official release date. On June 9th, we’re all going to find out just what kind of awesome features and visuals this company has in store for us this time.

Some of it is already known through media packages and so far, the game looks amazing. The team behind the studio has promised plenty of high-quality 3D graphics and visuals that bring immersion to the reels. On the other hand, there are several features that will turn this 5x3 slot game into a truly awesome experience.

Players can look forward to Arcane Lock Mechanics that locks the…

…highest paying symbols in place while the rest of the reels goes into a respin. Then there’s the Arcane Multipliers mode that can bring random multipliers ranging from x2 to x5.

Clint Andersson, the producer behind this game, shared his insight: “The game contributes with a whole new standard of rendering graphic fidelity in a game for the portfolio. Initially, the story behind the game comes from one of my personal favorite 3×5 slots, but the game is old, and I wanted to add improvements to it while still maintaining the true feeling of the original.”

Andersson has also commented on the graphical aspect of the game, saying that: ”The artists working on this game were adamant about pushing the graphic fidelity of this game to increase the richness of the symbols and how to present value. The game is made fully in 3D and boasts cool features such as the Arcane Lock, which locks symbols of the same type and Arcane Multiplier, where a random multiplier is given to the player any time a reel is locked which adds for extra excitement.”

“As for the inspiration for Arcane Gems, it comes from the gathering needs of all people, the jewels to be eye-catching in a way that fascinates a little more than is usual in video slots. We have taken inspiration from AAA-produced games in the casual-gaming market to find a style that adds to our already existing style. Our graphic designers and developers used the latest standard in web rendering.”

Quickspin is a software provider with a long history of making awesome games for the iGaming industry. The company has been around since 2011 and has dedicated itself to building immersive slots and other gaming content. The attention to detail and overall quality of work has allowed it to build a massive distribution network full of top tier casino operators.