Build A Powerful Empire in the Latest from Blueprint Gaming 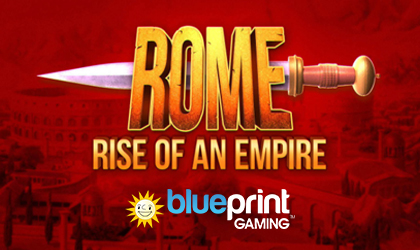 As the phrase suggests, “Rome Wasn’t Built In A Day,” well, neither was their entire empire. In the latest slot machine by Blueprint Gaming, called Rome: Rise Of An Empire, you will get the opportunity to showcase your adroitness and strength in order to get rewarded!

A leading game studio from the United Kingdom has prepared an interesting reel slot that will drag you into a war where you will have to fight hard to receive some sensational prizes. Every battle is tough, but at least this game will give you a glimpse of that period of time when Gladiators were idolized and praised.

Features That Will Leave You Breathless:

This fun 5x3 video slot enables you to become a fearless Roman Gladiator that is not afraid to showcase its strength and power in front of a large audience in a colosseum.

Features that will definitely give you the motivation to give your best are not one, but five bonus rounds.

How do you trigger them? You can do that by landing at least three colosseum bonus characters across the reels and activate any of the following: Big Money Bonus, Urn Riches, Empress’s Treasure, Uprising and Volcanic Cash.

Each of these games are intended for those who are looking for some additional thrill during the gameplay.

Once it’s your turn to start the fight, a few tigers will lead you to the arena and will reward you with one out of five-reel modifiers on any spin!

That includes Sword Strike, Bonus Boost, Spears of Destiny and Symbolus Maximus. Jo Purvis, Director of Marketing and Relationships at Blueprint Gaming gave his opinion of this game:

“Players will need nerves of steel to handle the heat of the Colosseum and land big prizes in our latest release Rome: Rise of an Empire.

The battle-themed game is full of bonus rounds reel modifiers to keep our gladiators on their toes as they hunt for glory. We’re sure the newest addition to our ever-expanding slots portfolio will prove a hit with both new and existing players.”

From Cartoonish To More Serious Slots:

Blueprint is continuously working on creating different slots. The last one had a more childlike design and characters while this one gives you a preview of that exciting period of time in this eternal city.

We loved it and we hope that you will feel the same way!