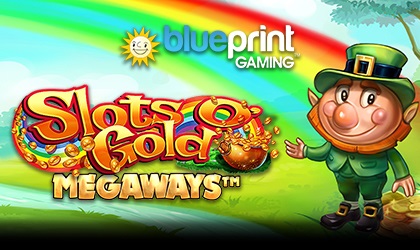 Lately, Blueprint Gaming has been keeping themselves busy by continuously developing new releases. Although the holidays are just one blink away, there is no rest for them.

What does this slot machine actually represent? It is an improved version of their widely-popular game called, Slots O’Gold. Plus, it is worth mentioning that one of the enhancements is the powerful Megaways mechanic.

Besides this, players will be smitten by the joyful leprechaun that perfectly complements the entire atmosphere and design.

Slots O’Gold Megaways offers players around 15,625 ways to win! Fans of the original game probably remember some alluring features that were embellishing the reels. This time, you will also be surprised to what it has to offer.

It includes all features that you’ve seen before in the original, plus spectacular six-reel mechanic that is going to help you grab more superb prizes!

During the game, you will come across Rainbow Gold icons that will transform in order to unveil any other random character. Furthermore, the Leprechaun Wilds will blast-off the Rainbow Respins bonus game during which more wilds will keep on showing, activating more bonus spins!

This latest edition can be played on all devices and it part of Blueprint Gaming’s operator-specific Jackpot King Progressive system.

Jo Purvis, Director of Marketing and Relationships at Blueprint commented:

“Following the huge success of Slots O’ Gold, we’re thrilled to have unveiled a new and improved version of this Irish-themed slot. Integrating the highly popular MegaWays™ mechanic will give the game an added dimension and enhanced user experience, which we’re sure will appeal to fans of the original release, along with new players.”

What Do We Know About Blueprint?

They are one of the most popular game studios in the United Kingdom and are also a member of Germany’s, Gauselmann Group. They have been widely-known in the gaming industry due to their successful career of creating high-quality games for various clients.

Furthermore, their games are at the disposal of more than 100,000 land-based gaming terminals across the country. Besides the UK, they can be found in Italy and Germany. They released their latest game just a couple of days ago and just like the previous ones, it has also become a huge success.