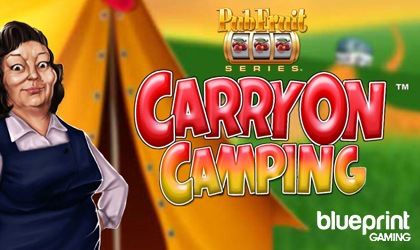 Blueprint Gaming, a slot game specialist from the UK, has announced the launch of a brand-new slot game titled, Carry On Camping. Inspired by the cult British comedy film of the…

…same name, the game does a great job of bringing back some of that classic humor. On top of that, there are features that can possibly yield lucrative prizes all around.

A Trip Down Memory Road:

The developer, being originally a UK company, has decided to give their fellow compatriots a trip down memory lane. Slot games based on films or TV shows are nothing new; however, rarely does a company choose such a niche classic. The title was created based on a 1969 British comedy that has…

…been highly popular in the UK. The studio behind this release has done a great job of capturing the essence of this cult movie and delivering it in a slot format. In a way, the game appeals to the fans of the original movie, but also those who appreciate innovative slots.

In order to achieve this level of authenticity, Blueprint closely followed the aesthetics of the movie. Fans of the film will be thrilled to know that Sid James, Joan Sims, and Kenneth Williams are back as well. These iconic legends of British cinematography are no longer with us, but their roles as main characters of this movie have been forever immortalized by the developer’s creative team.

More than Just a Memento:

All of its nostalgic value aside, this slot game offers much more to potential players. Despite leaning towards the classic side of things with its 3x3 reel grid, the offering packs great features such as Big Money mode, a Bonus Trail, Cash Ladder, Hi/Lo Games and much more. It is worth mentioning that it is a part of the brand’s Pub Fruit Series as well.

Jo Purvis, Director of Marketing and Relationships at Blueprint, commented on the new release: “Oh, hello! The Carry On franchise is a comedy classic and we’re thrilled to welcome iconic characters Sid, Hattie, and Kenneth to our Pub Fruit Series. The Blueprint design and development team have ensured that every aspect of the gameplay will appeal to fans of the series, which is sure to be a wild and fun experience for players.”

Blueprint is a UK-based game development studio that has been creating high-quality slot games since it was founded in 2001. Working mainly in the domestic markets, the studio has quickly risen through the ranks, establishing a reputation for itself. All of this has made them pop up on Gauselmann Group’s radar, who ended up acquiring the studio.

Today, the company creates slots that meet the needs of the market, offering multi-language support as well as multi-currency support.