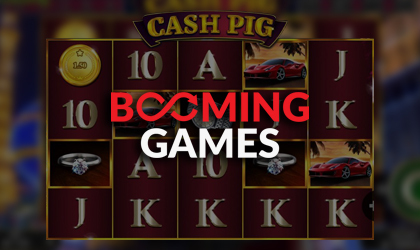 Booming Games, an online casino provider, has released its Cash Pig video slot. This high-volatility title packed with an RTP of 95.11% features 5 reels, 4 rows and 30 active paylines and a maximum potential win of 8000x the bet. The slot will welcome the players with all luxurious kinds of stuff such as shiny watches, private jets, Ferraris, rings which are the most valuable symbol, diamonds which are wild symbols, and champagne glasses are scattered symbols.

The extra spin feature is activated with at least 3 scatters on reels 1, 3, and 5, where the Minor Elimination feature removes all winning minors from the reels in order to ensure high payouts. Triggering the Major Upgrade will turn Major symbols into gold and their value will be doubled, so every spin during the game is very entertaining and exciting. If the reels are filled with coin symbols and each with multipliers from 2x to 500x, plus the piggy bank collector on the 5th reel will introduce the players with the richest feature in the game and the piggy bank collector will reward players with the full value of all coins on the reels.

Moritz Blume, Booming Games’ Head of Product, commented: “It’s time to live the high life with Booming Games’ latest release, Cash Pig. This lavish high volatility game has a 5×4 grid with 30 paylines and a mind-blowing win factor of 8,000x! This will appeal to all levels of players!”

Booming is one of the most popular brand in the iGaming industry and it's known for its B2B services, 3D slots and other games with amazing performance. The company was established in 2014 in the Isle of Man and they have launched over 50 games, including many slot machines that became popular in the Asian online casino market. While the supplier is a relatively young casino provider in the iGaming industry, its popularity is growing rapidly. After being several years as an independent brand, it decided to expand its activities through partnerships with two major Asian providers: Xin Gaming and Asia Gaming and this is one of the reasons that they have an office in Manila, which allows the brand to expand its international presence. Today, it has headquarters across the world, including the United Kingdom and Greece.